Kanika Kapoor confesses her love in her latest release ‘Jhanjhar’ Is there anything better than the feeling of your heartstrings vibrating and your eyes glistening during the final chorus of a love song? Universal, true and essential, Kanika Kapoor’s first love song titled ‘Jhanjhar’ is an ancient craft and an elusive skill. The Punjabi song has been written, composed and sung by Kanika Kapoor. The authentic, specific and inspired song has her collaborating with Deep Money on the music and Nitin Gupta on the lyrics. The song is presented by Zee Music Company. The enchanting video is shot in a fortified manor house in the countryside of the UK. An ethereal Kanika is seen reminiscing about the token of love received from her lover. On the release, Kanika shares, “You can’t outsmart the heart. Romantic love isn’t a general state of being, it is pulled out of us by a special, unforgettable person. I wanted to share my sincerity and authenticity about this specific love. On an intuitive level, people will always feel it if it is real. I am romantic by nature. I know this, the rest the song speaks for itself.” 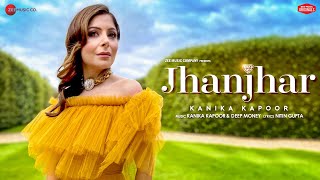