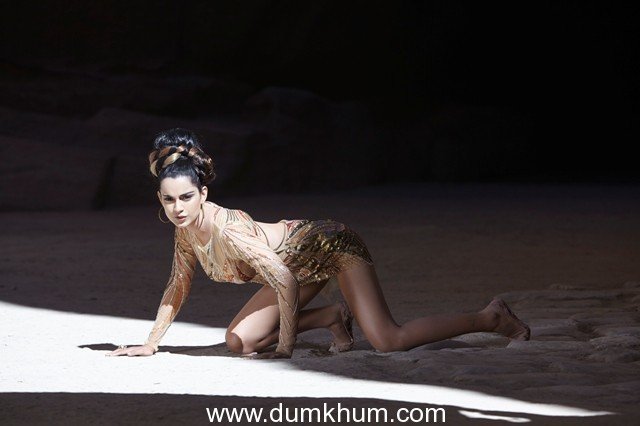 National award winner and Bollywood’s poster girl for fashion , Kangana Ranaut , who has always received a huge thumps up for her performances in the past,doesn’t disappoint with her latestact as the gothic and menacing Kaya in Rakesh Roshan’s Krrish 3.

As the superhero entertainer released yesterday, Kangana has everyone from the industry and critics floored with her versatile and convincing performance, as she essays a villainous role in the film.

All praise for the actress says Taran Adarsh, “Kangana Ranaut is superb. She exhibits a lot of toughness in her personality, which gels well with her on-screen character. She’s deadly and gorgeous — a lethal combo. The actress is sure to win laurels for the role.”

Says trade guru Komal Nahta, “Kangana Ranaut is first-rate in a very difficult role which, neverthless, has various shades and which gives her immense scope to perform.”

Adds critic Rajeev Masand, “The most impressive performance is from Kangana Ranaut, in the scene-stealing part of Kaya, who hits just the right balance between vulnerability and voluptuousness.”

“Kangana in her gothic and deviously dark avatar looks stunning and pulls off an outstanding act” says Madhureeta Mukherjee.

Says Rohit Khilnani, “Kangana Ranaut is simply outstanding! I’m told she initially rejected this role and then later agreed to do it. Now I know why she came back to it. She sails smoothly in the evil character gliding through the action scenes and making them look all natural.”

Says Kangana Ranaut, “Kaya was a physically and mentally challenging role and I’m glad that the hardwork paid off..The reactions and feedback are overwhelming and encouraging…”.