Kamar Ahmad Simon’s 90 minute documentary ‘Are You Listening’ has won the Golden Conch Award for the Best Documentary Film (above 60 minutes) at the Mumbai International Film Festival for Documentary, Short and Animation Films, MIFF 2014 which concluded today.  It gets  the Golden Conch trophy and Rs 500,000 cash prize (Rs 300,000 for the Director and Rs 200,000 for the producer – Sara Afreen).
Set in the coastal belt of Bangladesh, Simon’s  ‘Are You Listening! ‘is a powerful and beautifully photographed film that reveals the alarming effects of climate change and deftly captures the fighting spirit of a community and their will to survive. The global issue of climate change is experienced in microcosm in Kamar Ahmad Simon’s film, as he observes the families of Sutarkhali. The coastal village was left underwater by a tidal surge after a cyclone, and Rakhi, her husband Soumen and their six-year-old son are forced to live on a dyke with 100 other families. The government is slow to help the families reclaim their land, and continuing delays cause mounting friction. The Golden Conch for Best Documentary Film  upto 60 minutes went to Maria Stodtmeier’s (Germany) “In Between : Isang Yun in North and South Korea’.  This documentary explores whether music can overcome the boundaries of a divided country. It examines the world’s of North and South Korean music, taking the viewer along on an exciting journey through two political systems. It gets  the Golden Conch trophy and Rs 500,000 cash prize (Rs 300,000 for the Director and Rs 200,000 for the producer – Paul Smaczny). FTII production ‘Black Rock’ directed by Vikrant Janardhan Pawar was adjudged the Best Short Fiction film in International Competition. . It gets  the Golden Conch trophy and Rs 500,000 cash prize (Rs 300,000 for the Director and Rs 200,000 for the producer – FTII).
The Golden Conch Best Animation Film award went to ‘True Love Story’ by Gitanjali Rao.  This 18 minute animation , set in the streets of Mumbai explores what happens when the ultimate Bollywood fantasy is applied in reality.  It gives glimpse into the influence of Bollywood on real life in Mumbai, told through puppet animation.  The award carries a Golden Conch and Rs 500,000 cash prize. Gulabi Gang gets Best Director award for Nishtha Jain
Nishtha Jain, whose documentary ‘Gulabi Gang’, won the Best Director Award in the International Competition section of MIFF. She gets Rs 100,000 cash award and a certificate.  ‘Gulabi Gang’ tells the story of Sampat Pal and her group of women vigilantes and activists from Bundelkhand, who fight for womens’ rights and their empowerment.  Armed with a lathi (stick) the Gulabis visit abusive husbands and beat them up unless they stop abusing their wives.  The film has won several other awards, and there are plans to release it in theatres on February 21, as part of PVR Director’s Rare initiative. Nishtha Jain, an alumnus of Film & Television Institute of India, FTII is based in Mumbai . Dhvani Desai’s RTI film  ‘Chakravyuh’ voted most popular film of MIFF 2014
For the first time, MIFF had introduced a new category of award – ‘Most Popular Film of the Festival’, which was to be chosen through voting by festival delegates.  Dhvani Desai’s short film ‘Chakravyuh’, through the struggles of four characters from different regions of India, throws light on how the Right To Information Act can be used to fight corruption. The film, produced by Films Division, was first shown on October 12, 2014 on the occasion of 8th anniversary of RTI in Mumbai. 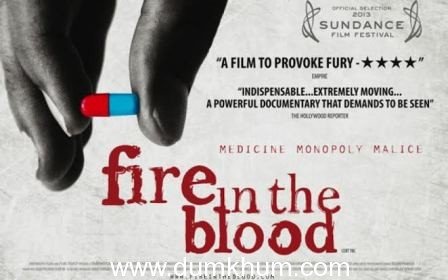 Dadasaheb Phalke Chitranagari Award
Mumbai based film maker Dylan Mohan Gray’s film ‘Fire in the Blood’ got the Dadasaheb Phalke Chitranagari Award for Best Debut Film of a Director.  The  84 minute film tells the story of how Western pharmaceutical companies and governments blocked access to low-cost AIDS drugs for the countries of the global south in the years after 1996 – causing ten million or more unnecessary deaths – and the improbable group of people who decided to fight back. This award carrying a cash prize of Rs 100,000 and a Trophy has been instituted  by the Maharashtra Film Development Corporation, Mumbai
IDPA Award for the best student film
IDPA Award for the best student film went to ‘Sonyacha Amba’ (Golden Mango) directed by Govind Raju and produced by FTII, Pune. This film had participated in Berlin and Beijing festivals as well. The Rs 100,000 cash and Trophy is given by the Indian Documentary Producers’ Association, IDPA.
Pramod Pati Award
Pramod Pati Award for most Innovative film, carrying a cash prize of Rs 100,000 and a trophy went to Pushpa Rawat’s  57 minute documentary ‘Nirnay’ (Decision).  The film explores the lives of women in a lower middle class colony in Ghaziabad, who are young and educated, but feel bound and helpless when it comes to major decisions about their lives, be it career or marriage.
Kashmiri film ‘Tamaash (The Puppet) is the best Short Fiction Film
The Kashmiri short-film ‘Tamaash’ (The Puppet) won the Golden Conch award for the Best Short Fiction Film (upto 45 minutes) in the National Competition. Tamaash is the first film by directors Satyanshu and Devanshu Singh, who also wrote, edited, and produced it, along with Tulsea Pictures. The film insists on the power of goodness and the importance of preserving the innocence of children.  It had won the Golden Elephant Award at the International Children’s Film Festival held in Hyderabad during November 2013.  Along with the Golden Conch, the filmmakers also get Rs 250,000 cash award.
Also in the National Competition section, ‘Seven Hundred Zero Zero Seven’ by Altaf Mazid  got the Golden Conch for Best Documentary (upto 40 minutes), while ‘Have You Seen the Arana’ by Sunanda Bhat and  ‘Invoking Justice’ by Deepa Dhanraj shared the  Best Documentary Awards in above 40 minutes category.