Link of the trailer: https://www.youtube.com/watch?v=VFIYNUWw5j0* 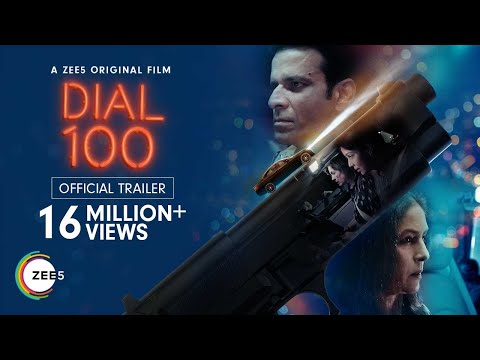 Dial 100 | Official Trailer | A ZEE5 Original Film | Premieres 6th August 2021 on ZEE5
The much-awaited trailer of Manoj Bajpayee, Neena Gupta, and Sakshi Tanwar’s suspense thriller Dial 100 dropped yesterday, and whoever has watched the edge of the seat trailer can’t contain their excitement. The original film, produced by Sony Pictures Films India, Siddharth P Malhotra, and Sapna Malhotra’s Alchemy Films is directed by Rensil D’Silva and is set to premiere on ZEE5 on 6th August.
The trailer opens in the Police Emergency Call Centre where Manoj Bajpayee’s character Nikhil Sood receives a call from a woman who is grieving the loss of a son and is now on a mission to seek justice. This woman in question is Neena Gupta’s character Seema Pallav in a never seen before grey avatar. The movie also sees Sakshi Tanwar in a crucial role as Nikhil Sood’s (Manoj Bajpayee) wife who too gets pulled into the mess and can be seen on gunpoint. The 2:51 minutes trailer definitely has the audience glued to the screen and by the end of it, wanting for more.
The internet is buzzing with good reviews for the trailer and everyone including the ‘aam junta’ and the film industry, can’t contain their excitement for the premiere of this nail-biting film. From veterans like Kajol, Dia Mirza and Joginder Tuteja to television stars like Mouni Roy, Gauahar Khan, and Ravi Dubey are all praises for the edgy trailer, the stellar star-cast and production value of the film.
Actress Kajol took to her social media account and wrote, “Great to hear some exciting news this morning. Dial 100, your trailer really got me. It is super engaging and I can’t wait to watch the movie!
All the very best to Alchemy Films for your next…”
Shruti Haasan posted the trailer on her Instagram story and wrote, “Dial 100. Can’t wait to watch it and what a stellar cast!!!”
Dia Mirza posted the poster of the film and wrote, “WOOHOOO!!! Some Amazing people have come together to tell this story.

“
Actress Mouni Roy wrote, “Can’t wait to watch this one”
Gauahar Khan wrote, “All my Favourites”
Even actors like Vatsal Sheth, Surbhi Chandna, Aamir Ali, Kushal Tandon, Sanjeeda Shaikh, Nia Sharma, Ragini Khanna, and others also shared the trailer on their social media and expressed their excitement.
The story unfolds in one night and warns the audience about how one phone call can change everything and turn everyone’s life upside down. While Manoj Bajpayee will be seen in a race against time to save his family, Neena Gupta will be seen in a dark role where her character is willing to go to any extent to avenge her son’s death.