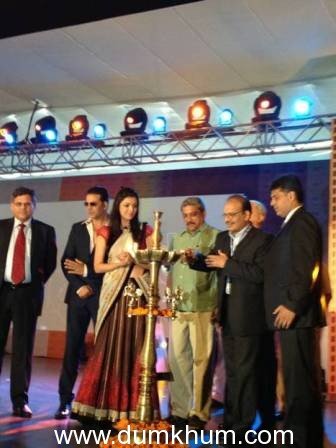 Kajal Aggarwal was seen lighting the traditional lamp at the 43rd IFFI in Panaji, Goa on 20th November 2012. Along with Kajal the Minister for Information & Broadcasting, Manish Tewari, Minister of Culture for Republic of Poland, Chief Minister of Goa, Manohar Parrikar and Akshay Kumar who was the Chief guest were present at the occasion. Celebrating the hundred years of Indian cinema, the 43rd International Film Festival of India will showcase a special section – ‘Centenary Celebrations’, which will screen a selection of the best movies from Indian Cinema’s splendid hundred year history. The Festival involves a total screening of more than two hundred movies over the ten day duration. This time at IFFI,  the Indian cinema industry will pay a special tribute to the completion of  hundred years of Indian cinema, where a jury’s choice of  Film will be cited with a special award comprising of a Silver Peacock, Certificate and cash prize.