John Abraham injures himself while shooting interval scene of Welcome Back ! 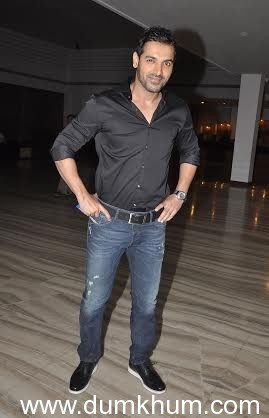 Though Welcome Back is in theory a comic entertainer, shooting for the film turned out to be quite challenging for lead John Abraham who ended up injuring himself quite often – Having sprained his back while riding a Hummer in the desserts in Dubai, the actor then injured himself while filming a action sequence which involved him banging his head on a glass table , a crucial scene in the film just before the interval.

John ended up hurting his head with several cuts and bruises and a doctor was immediately summoned on the sets to tend to his injury – though director Anees Bazmee was willing to postpone the shoot, John decided to conceal his bruises with make-up and continued shooting for the scene.

Confirming the news says Anees Bazmee, “ John often joked that he ended up injuring himself shooting a comedy film,more than when he shoots action films. He concealed his bruises with make-up and continued shooting. It was the last scene and we were supposed to pack up after that, so he wanted to complete it”.