Like every year, Jai Hind Alumni Association organized this get- together where the illustrious ex – students were acknowledged for their outstanding performances and for being torch – bearers of Jai Hind College. Prof. N.W. Shivdasani welcomed the Alumni members later was followed by musical jugalbandi by talented classical singer Kaajal Chandiramani and versatile Toshi Sabri drowning the audience in melodious evening. 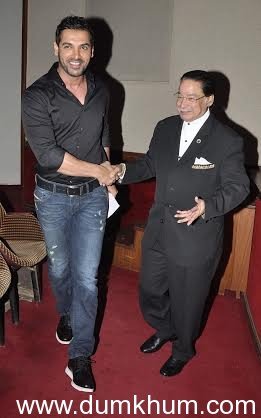 Prof N.W. Shivdasani, Secretary, Jai Hind College Alumni Association said, “We have begun this alumni association in 2002 with a handful of students and the main purpose was to collect database of students. Today we have reached to the 11th alumni reunion and with each passing year we are developing this”. Being the backbone of Jai Hind Alumni Association Prof Shivdasani also announced his retirement in June 2014 after being associated with the college for last five decades promising everyone that his soul belongs to college and will always be. 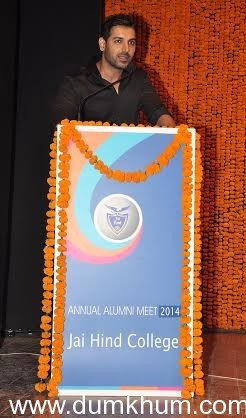 John Abraham said “I am one of the blessed proud jaihindites who not only did his major in economics from Jai Hind but like any other student roamed around roads A and B… Today being called here as a Chief guest makes me really feel embarrassed. I would love to be associated with Jai Hind Alumni Association and my professor who still scold me as an ex student only.” Jai Hind Alumni Association represents the alumni of Mumbai’s reputed Jai Hind College. The primary objective of the Association is to promote and maintain contact among all Jai Hind-ites, by creating opportunities which would enable alumni to strengthen their bonds with their alma mater. Moreover, this association works to help the college with matters concerning its promotion, development and welfare.

Jai Hind is one of the premier educational institutions of Mumbai. However, the managing board and the faculty do not believe in being complacent with the place they have carved in the field of education. Their endeavor is to move beyond the conventional academic programmes so as to keep pace with the changing academic scenario.