Y-Films, All India Bakchod (AIB), The Viral Fever (TVF), East India Comedy (EIC), SnG Comedy, Conde Nast India, Aditi Mittal and many more digital content creators to feature their content and talk about why online is the way to go.

Jio MAMI 17th Mumbai Film Festival with Star India is going digital with a new section called ‘PLAY’ which will be held on Sunday, November 1st at 12 noon, PVR Juhu. Digital front-runners like All India Bakchod (AIB), The Viral Fever (TVF), East India Comedy (EIC), SNG Comedy and Aditi Mittal will be showcasing their original content and bringing the house down in this interactive session.

The original Yash Raj Films YouTube series from their youth studio, Y–Films ‘Bang Baaja Baaraat’ will be premiering at ‘PLAY’. The web series is a hilarious take on what happens when two families from different backgrounds come together for a wedding. The series is directed by Anand Tiwari and features Ali Fazal, Angira Dhar, Rajit Kapur, Shernaz Patel, Gajraj Rao, Ayesha Raza and Neil Bhoopalam, who will all be present at the venue for the red-carpet premiere.

The Viral Fever (TVF) will showcase an episode from their groundbreaking show ‘Permanent Roommates’ and AIB will be showcasing their viral hit, Honest Indian Weddings. Acclaimed director, Sujoy Ghosh, will also be present at the event to showcase his short film ‘Ahalya’, along with actor Radhika Apte. Actors Nimrat Kaur and Divyendu Sharma will present their Terribly Tiny Talkies short film El’aiychi and Conde Nast India will premiere its ‘Journeys of a Lifetime’ series, featuring Fatima Bhutto.

A discussion with some of leading names from the digital world will round off the session. Satya Raghavan – Head of Google India, Alex Kuruvilla – MD, Conde Nast India, Smita Jha – Executive Director, PwC India, Sujoy Ghosh – Director, Radhika Apte – Actor, Tanmay Bhat – AIB and Biswapati Sarkar – TVF, will talk about what the future holds for digital content and how it can help challenge prevailing steretypes.

This discussion will be moderated by the curator of PLAY, Nikhil Taneja, who is of the opinion that, “‘Digital has changed the rules of moviemaking, as anyone with a DSLR and some spirit can today be a filmmaker, but it has also made the playing field free and equal for all. It is to celebrate the stories that are being told unadulterated, unabashed and uncensored by these change-makers, that PLAY has been conceived.”

Speaking about introducing this new section for the festival, Anupama Chopra, Festival Director, 17th Jio MAMI Mumbai Film Festival with Star India said, “PLAY celebrates the most original and innovative story-telling in the digital medium.  This is where a new generation of story-tellers now choose to work. With PLAY, MAMI celebrates the future.”

Here is what’s going on at PLAY – 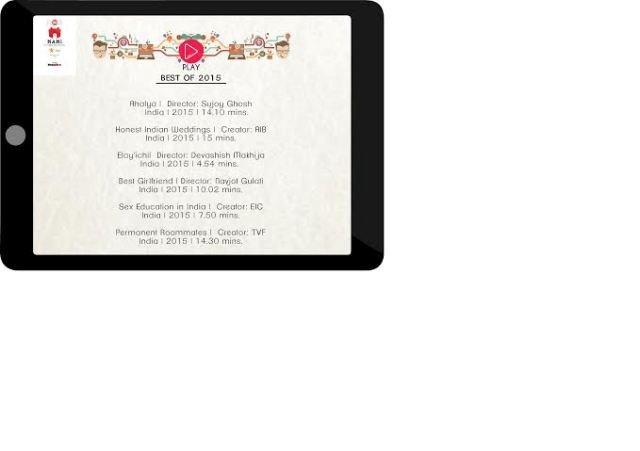 To attend the festival, viewers can register online at http://in.bookmyshow.com/mami/ or visit registration counters at the festival venues listed above.

The Jio MAMI Mumbai Film Festival With Star India is an inclusive movie feast. We showcase the latest cutting-edge, independent cinema – art house fare alongside genre movies from Bollywood and Hollywood and cult international movies. We offer the best of world cinema to the people of Mumbai and we offer the best of Indian cinema to the world. The festival is run by the Mumbai Academy of Moving Image popularly known as MAMI. This is a space where we revel in the sheer pleasure of cinema, the joy it gives us and how much it enhances our lives. The goal is to nurture and ignite a passion for movies. We want Jio MAMI to be shorthand for excellence in cinema.

Mumbai – the financial capital of India is also the epicentre of the Indian film industry. The city plays such a major role in production and dissemination of Indian films and television programmes that it is widely known by its acronym ‘Bollywood’. In 1997, a group of film industry stalwarts headed by late Hrishikesh Mukherjee founded the Mumbai Academy of Moving Image (MAMI) as a not-for-profit Trust. Their main objective was to organise an annual International Film Festival which the film industry and the country could be proud of. MAMI has been organising the festival for the last 16 years and aims to foster a climate of good cinema. MAMI engages people from all walks of life across the city and country who enjoy and love good cinema. It is Mumbai’s only film festival that is entirely created and run by film professionals and a group of members from corporate India. Appreciation of good cinema, stripped off all the limiting labels of art and commercial, can only come about through exposure to the best of films the world has to offer. The Festival is the first step in that direction.