B-Town has witnessed the Successful and Memorable ‘Opening Shoot’ and ‘Muhurat’ of upcoming Bollywood comedy film, ‘Gun Pe Done’ on 1st Nov. 2014. This auspicious event was
attended by the prominent starcast of the film starting with Talented actor Jimmy Shergill along with Tara Alisha.  Vrajesh Hirjee , Pankaj Singh and the second lead Bidita Bag, were also part of the Muhurat. The ‘Muhurat’ was  done by Aftab Ahmed Khan ( ‘Shoot Out At Lokhandwala’ fame and ATS Chief) and the opening clap was been given by entire team of the film including the director Abhik Bhanu and producers Manoj Menon and Asif Kazi. The star-cast and director  shared their views and excitement. The event was  held in at Aarey Colony, Sankraman Design, Goregaon, Mumbai. This upcoming flick is a laugh riot with a blend of romance, action and ‘full-on’ entertainment value with a plot of a Small town boy, Pancham played by Jimmy Shergill who is trying to make it big in the Film world, followed by situational comic game of romance and crime mafia. About Jimmy’s Character:
A small town guy from Allahabad trying to make it in the big city. A true narcissist and boyishly charming, Pancham always finds a way to get what he wants. Even when he gets manipulative he always has the best interests at heart for his one true love Monica. Movies run in his blood as you often find him mimicking old Bollywood legends and proudly showing off his hat that once belonged to Amitabh Bachchan. But most of all, you find him flaunting his relation with Prem Chand Gupta, a producer and how he is the star in his next movie. 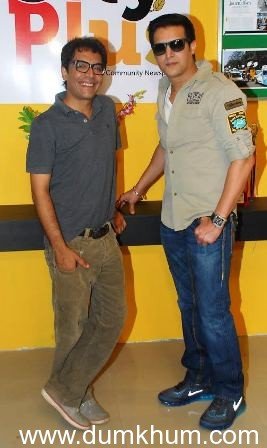 Jimmy talks about his role in the film, ” he is playing Pancham who is a struggling actor and a very big fan of Feroz Khan and who always imitate him following his way of dressing, Long boots and all. Pancham feels that he imitates Feroz Khan and says his dialogues very perfectly, but the fact is exactly opposite. Friends and relavites around Pancham are aware that he is not doing well imitating Feroz Khan but they all just ignore. Jimmy adds that Pancham is a very Honest and sincere Character and later the story unfolds….