Jalandhar, 15 January 2013: Having suffered the disappointment of being beaten in the opening game of the Hero Hockey India League, Jaypee Punjab Warriors would try and get a better result at home when they take on Ranchi Rhinos in Jalandhar on Wednesday.

Warriors fought well against Delhi Waveriders on Monday, but their forward-line failed to create enough goal-scoring opportunities, and that is something that the team think tank would have worked on, on Tuesday, their only rest day for the first four days of the tournament. The likes of SV Sunil, Shivendra Singh would have to play a more attacking hockey, if the Warriors want to be a lot more dangerous in the coming games.

Warriors skipper Jamie Dwyer admitted after Monday’s game that the team needs to do better. “We didn’t start the game well.  I think, as a team, we still need to combine a bit better. Hopefully, we would start doing that in the next few games,” the Aussie said on Monday night. Even though Warriors lost the match, there was one outstanding performer on their side, and that was their goalkeeper Jaap Stockmann of Netherlands. Stockmann easily made at least half a dozen saves that kept Warriors in the hunt till the end against the Waveriders. Warriors would hope to see a similar kind of performance from the Dutchman, easily one of the top goalkeepers in this league.

On the other hand, Ranchi Rhinos would be hoping to get their Hero HIL campaign off to a good start in an away game. Ranchi Rhinos is one team in this league that has invested a lot in the local talent. And it would be interesting to see how the local youth joins hands with some top national and international stars. The likes of Moritz Fuerste, Ashley Jackson, Austin Smith, Francisco Cortes would have the responsibility on their shoulders to guide the local talent. Then they have the young exciting talent of Birendra Lakra. The man from Orissa, who scored the opening goal in India’s London Olympics qualifying final, might be just 22, but there are a lot of expectations from him already. It would be interesting to see how he performs in this exciting format against the Warriors on Wednesday.

The team composition of the Jaypee Punjab Warriors could be another interesting factor. They go into the game against Ranchi Rhinos knowing that they have just a little over 24 hours before they take on Uttar Pradesh Wizards in the day’s only match on Thursday. Hence, keeping all the players fit, and giving them enough rest, could be another challenge ahead for the Warriors.

It was only after the Warriors were down by two goals on Monday that they started to play aggressively. The team management would like to see the Warriors to be a bit more proactive on Wednesday.

Jaypee Punjab Warriors player Simon Orchard said that their team have taken measures to counter the loopholes in their attack and defense, which was evident in their game yesterday and said: “We are confident in our performance tomorrow and will surely up our game and comeback strongly.” 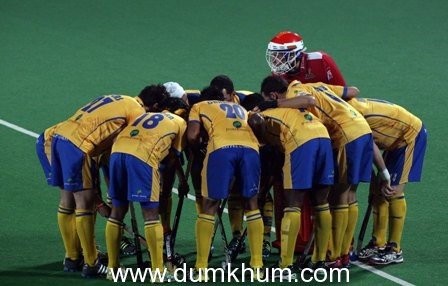 Team captain Moritz Fuerste was seen stating: “We have closely followed yesterday’s match and have created our strategies on those lines for tomorrow’s game. Punjab is a strong team, but we have studied their game thoroughly and will certainly utilize our strategy against them. We are confident of putting up a good show.”

The game is set for a 6 pm start, meaning that the weather would be at its pleasant best.