Jacqueline Fernandez the third most Desirable Woman in the Country 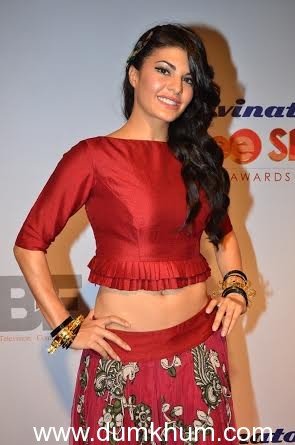 Blessed with porcelain looks and one of the hottest bodies in B-Town, Jacqueline Fernandez was recently voted the third most Desirable Woman in the country on the list that features some of the most gorgeous women in the industry.
The former Miss Sri Lanka, who immediately shot to fame as she featured in some sizzling numbers and had several wow moments with her red carpet appearances ,also won hearts as she was covergirl for magazines like Harpers Bazaar,L’Officiel, Filmfare ,Verve,Hi Blitz,Femina and Grazia to name a few.
The actress was also recently announced the face of beauty brand Body Shop.
Says an industry source, ” It came as no surprise that Jacqueline Fernandez made it to the number 3 spot on the Most Desirable List by TOI- Her striking looks,screen presence ,her recent news of being announced the face of BodyShop and the fact that she is working with the country’s biggest superstar in Kick all contributed to her win”