The 32nd Priyadarshni Academy Global Awards, ended with gala fanfare. The event was graced by the presence of celebrities and renowned political dignitaries. The prestigious award function was held at Trident, Nariman Point, Mumbai. Priyadarshni Academy is a prominent Socio Cultural & Educational Academy, founded by Mr. Nanik Rupani, a true visionary. The academy excels in transforming dreams of the common man into reality and strives hard to honour people who make a difference to the society. Mr. Niranjan Hiranandani, is the Chairman of this prestigious Academy. Mr Niranjan Hiranandani quoted, “The Global Awards Function of the Priyadarshni Academy saw luminaries from around the world being honored. The event was witnessed by the who’s who of the city who came out to support the Academy which completed its 32nd year. It was great to see our union ministers grace the event and share their thoughts on the current scenario in India”. Mr. Nanik Rupani quoted, “Priyadarshni Academy’s Global Awards Function was a grand success with great many people thronging to the overflowing Regal room of Trident. Everyone was totally amiss with the choice of awardees – from Nobel laurate to social activists – and thanked the academy for fielding the best around the globe. They were completely amazed with the CVs of the trophy winners. Actress Juhi Chawla quoted, “Am very touched, and honored to receive such a prestigious award in the midst of such August gathering … I had never imagined that my tiny good deeds would add up to this one day … I am especially thankful to Mr Nanik Rupani who himself is such a kind hearted, thoughtful and helpful gentleman, who thought I was worthy of such an honour”. A total of seven awards were presented this year. The list is as follows; 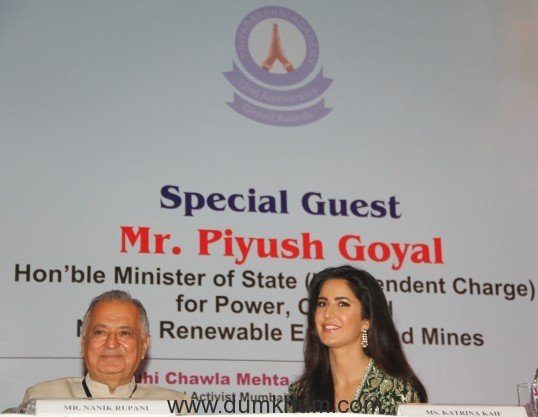