Every actor, producer, manager thriving in the film industry wishes to climb the steps of success. The vastness of the industry and the variety of contours it has makes you try your hand in at least one field. Sunny Shah, well-known celebrity manager in the industry, too had some similar thoughts and decided to dive in the production of the film.

Sunny Shah who entered the industry in 1988 by starting an ad agency wished to produce a film back then but owing to some crises he turned to celebrity management and with managing the TV star Deven Bhojani  film Jo jeeta wohi sikandar, Shah’s flight took off. After being in the industry for more than 25 years he has co-produced a film ‘Le Gaya Saddam’. Based on the story of a conservative Muslim society the film teaches the Muslim youths the importance of divorce in one’s life in a very jovial manner. “I am very confident that even if it’s a small budget movie it will be appreciated by the audience.” 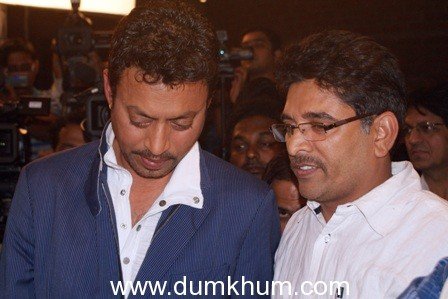 Supporting Shah in this venture is actor Irrfan Khan. “Irrfan Khan has busy schedule but even then he was present for the music launch of my film ‘Le Gaya Saddam’ as a chief guest and it touched me immensely. He also mentioned that if I need any kind of support with my ventures he will be happy to help,” said Shah. Shah who has managed celebrities like Pooja Batra, Divya Datta and still is managing Rajpal Yadav,Darshan Jariwala ,Arya Babar,Anup soni ,Sakshi Tanwar,Claudia Ciesla etc. says that he shares a special bond with Irrfan Khan. He has been with Irrfan as a manager for more than 10 years now.

When asked if he felt it was risky touching the area talking about Muslim community’s way of treating a divorce, he said, “What we have tried to do through our film in a very good-humored manner is to give a message that marriage is an eternal bonding and needs to be treasured forever.” Apart from Managing Celebs and producing films Shah also produces plays and is an accomplished Event manager.