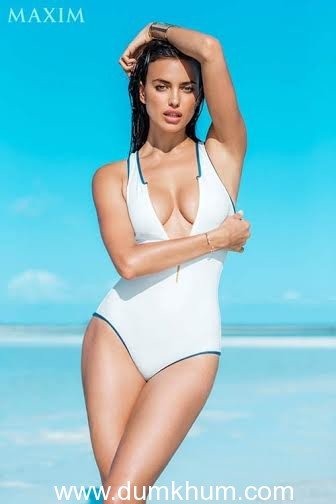 A video showcasing the beautiful Irina Shayk from the film ‘Hercules’ has been released. Irina Shayk plays the role of Megara , the wife of the titular Greek demigod portrayed by Dwayne ‘The Rock’ Johnson in the film.  In this new featurette watch Irina as she explains how much winning the part means to her.

The first time actress’s greatest asset is her indefinable heritage.  Irina excitedly mentions, “It was a very small role but a very important character for the movie and I felt this was something I could definitely handle for my first role. Also, my name is Greek, Irina, so it’s just destiny and I felt attached to the film right away.”

In the video, Director Brett Ratner, explains “Hercules is a superstar. He’s the most famous man in all of Greece. And he would have the most beautiful woman on his arm.” Shayk certainly fits the bill.

Dwayne trained hard to get in shape for the shoot and was impressed by Irina’s dedication to the role too, insisting she was the perfect choice to play Megara. “She has just, really, an amazing look. A very real and authentic look. She sure as hell didn’t disappoint,” he gushed. “She played it wonderfully. I mean, really magnificent. And she is incredibly beautiful.”

The movie is based on the graphic novel Hercules: The Thracian Wars. Distributed jointly by Paramount Pictures and MGM, the movie is directed by Brett Ratner. The movie also stars Ian McShane, Reece Ritchie, Ingrid Bolso Berdal, Joseph Fiennes, and John Hurt. The movie released on 1st August 2014.