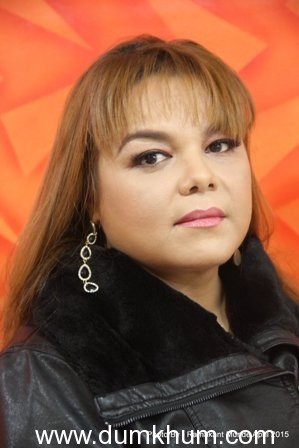 Nandita Singgha is presently writing,producing and even directing four films with journalistic background. The films are 1: MID-DEY 2:J RETURNS 3: MEGA CORP and 4: RED. She has already shot 35% of the first two films MID-DEY and J. RETURNS in Delhi. The character who will play the role of  J. DEY will be an A List actor who will be shortly announced by her.The film MID-DEY is all set for completion by September-October and will be released in December 2015 itself while the sequel J.RETURNS will be released in March 2016.
Excerpts from a brief chat with Nandita Singgha. How did the idea of making a films on  journalistic background  come to you ?
The broad daylight murder of J. Dey was the most shocking thing to happen. I just started probing the life of a journalist. I found that the pen of the journalist is the most powerful. He or she who is a journalist can easily come out with a story without any fear. When you compare a journalist with a lawyer or a policeman, we find that the journalist is doing far better service to mankind. A lawyer can lie . A policeman can file an FIR which can turn out to be fabricated too. But the journalist will write his story after his own true research and then the whole society reads it and applauds it too. Here was J. Dey who was writing a book on FIVE GANGSTERS and he paid his price to the bullet . That means a real journalist’s life is totally insecure. I am also fighting for the rights for journalists. There is no pension scheme for journalists. Why ? Half of the courses in journalism in India have closed their shops as they say Journalism is not a paying job. I found the journalists very hardworking who write and have no regular duty hours. They even come late night to their house as they have to complete a dead line for their stories. If so much hard work a journalist can do the why is the Government not helping them to get them benefits. The same journalists have made Modi jee the Prime Minister, Kejriwal the CM of Delhi, made Anna Hazare a national Hero and all the actors owe their stardom to journalists. It is now pay back time. In my own humble way , I am glorifying and highlighting the life of a journalist and that too with the eye of a lady journalist from U.K. who is shocked to see the life and times of an Indian journalist.I am the first woman filmmaker to direct an international film on Indian crime journalism.To give more authenticity to my films, I have also taken help of few  journalists to write the scripts and some  of them are creative writers too. It took 16 drafts to complete the first script of al the four films. You come from a corporate world and you have seen the rise and rise of corporates who have taken over the media in a big way . Comments.
Yes, today corporates have understood the strength of the media and are investing in a big way. The good old days of aristrocatic journalism is also coming back. Some of my old friends have been great editors too. I was a child when I had met Khushwant Singh several times. I was only 13 years old when I first won a debate  and a prize money  of 30,000 US dollars in Durban. Two American companies Motorolla and  3 M gave me training in technology and I introduced  the first video conferencing in the Asia-Pacific region. I even got several international awards for years together. I then branched out to advertisement shorts and have already made more than 430 advt. shorts for the digital world. Today, I have over 20 offices world wide and have more than 8,000 employees working for my company TOTAL PRESENTATION DEVICES LIMITED.
It is easy for the corporates to operate in a regularised manner. Hence the corporates are making their own killing in the Bollywood film industry too. Coming back to your filmmaking journey, how has been the experience so far ?
I have already made eleven films in South in all the languages i.e. Tamil, Telugu, Malayalam and Kannada. I have even directed a Bollywood film in 2007. I was always passionate in my work and I found that technically we are now very superior, almost every big director is making good cinema but only a handful of them are really concentrating in the content of the film. I liked the way A.R..Murugudoss makes his films. He is more focussed towards the content and knows to thrill the audiences with good stories which caters to all age groups. I appreciate his style of filmmaking. Also, I adore the style of Rakeysh Om Prakash . Even I will want to be known as a sensitive filmmaker who makes meaningful films with a purpose and also which has youth appeal. I have taken 37 characters who are all journalists in MID-DEY and J. RETURNS. Most of them are from NSD. It will be  a hardcore commercial film too with music, songs, fights etc.