Each district to have at least one skill development centre by 2017 – Venkaiah Naidu
Corporate India has responded positively to the Government’s call for playing a bigger role in skill development.  The challenges and opportunities of skill development in India were discussed elaborately at the National Industry Conclave on Skill held in Mumbai today.
Addressing a press conference at the end of the conclave, Union Urban Development Minister Shri Venkaiah Naidu said that skilling the youth is the biggest challenge in India. He said the number of vocationally trained people in India is only 5.3%, as against 70-90% in countries like Japan, South Korea and Western Europe.   Shri Naidu said, in the areas of skill development we have to take care of school dropouts, college dropouts, graduates and post graduates, engineering, vocational skills, agriculture and allied activities, craft and self-help groups.
Shri Naidu informed that six union ministers – Shri Nitin Gadkari, Shri Manohar Parrikar Chaudhary Rao Birender Singh, Shri Dharmendra Pradhan, Shri Rajiv Pratap Rudy and himself held wide ranging discussions with the captains of the industry seeking greater corporate participation in skill development.
The Minister stressed on the importance of imparting right skills for the youth and urged industry leaders to help in establishing at least one skill development centre in each of the districts of India.  “Youth are the future of our country, they have aspirations and we have to come together to fulfill their aspirations” he said. 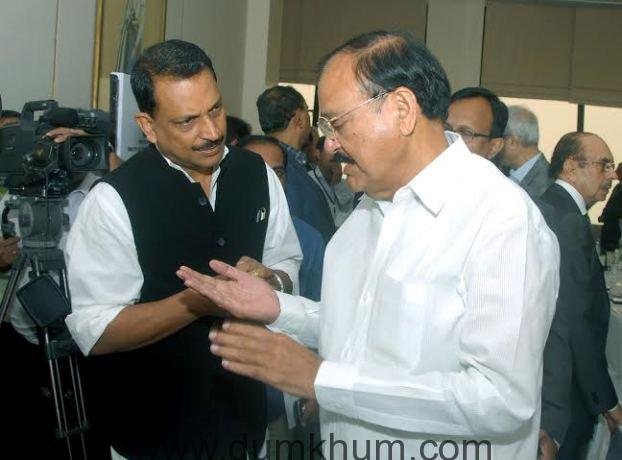 Stating that private sector employment and self-employment are the future avenues for the youth, Shri Naidu asked the industrialists to come forward and adopt ITIs (Industrial Training Institutes) across the country.
Shri Venakaih Naidu informed media persons that almost all the corporate leaders pledged their help in bridging the skill gap.  He said the industry requested the government to establish central mechanism of certification of skilled workers.  They also demanded establishment of training schools for the trainers, Mr. Naidu added.
Meeting with the industrialists
Earlier in the day Union Minister for Shipping, Road Transport & Highways, Shri Nitin Gadkari  said  industry participation in skill development could be a win-win partnership .  Defence Minister Shri Manohar Parikkar outlined the emerging opportunities in the field of defence utilities and underlined the need for having trained manpower to take up these jobs.
Skill Development Minister Shri Rajiv Pratap Rudy observed that corporates were already doing a lot of work under their Corporate Social Responsibility (CSR) programmes, but most of this was in the field of health and education. “90 per cent of CSR is focused till now on health care and education. If CSR funds can be channelized to skill development, it would be an investment in the country’s future and the industry itself can reap benefits”.  Shri  Rudy said that the government has prepared an elaborate road map for industry participation in skill development, and there is a great deal of operational flexibility being offered .  He also informed that the Government has liberalized the apprenticeship framework in a bid to fast track skill development.
Participating in the morning meeting, the Chief Minister of Maharashtra Shri Devendra Fadnavis announced that all ITIs in Maharashtra will be open for adoption by the industry.  He said, already 400 ITIs in the state have been adopted by industries and the result is encouraging.  Mr. Fadnavis observed that the skilling should be as per the needs of the industry and not become a mere certification process.
Cyrus Mistry of the Tata Group,  Sajjan Jindal of JSW,  Sunil Bharti Mittal of AirTel, Venu Srinivasan of TVS, G M Rao of GMR Group, Ajit Gulabchand of HCC,  Swati Piramal of Piramal Enterprises,  Niranjan Hiranandani of the Hiranandani Group, Nikhil Meswani representing Reliance, Naushad Forbes of the Forbes Group were prominent among those who attended the meeting.
The inaugural National Industry Conclave on Skills was organized in Mumbai to coincide with the 153rd birth anniversary of spiritual icon of youths – Swami Vivekananda.  This will become an annual event and will see participation across ministries and corporate.
Corporate Skill Excellence Centres
As part of the Skill India Development Mission, launched by Prime Minister Shri Narendra Modi on July 15, 2015, the Ministry of Skill Development & Entrepreneurship has embarked upon a special industry initiative to attract leading corporate to set up co-branded Corporate Skill Excellence Centres in PPP mode.  The Government will provide various tax and non-tax incentives for corporates that set up Corporate Skill Excellence Centres as part of their core business or CSR activities.  The CSR funds can be routed through National Skill Development Fund with specific outcomes
PIB Mum | MD | NS