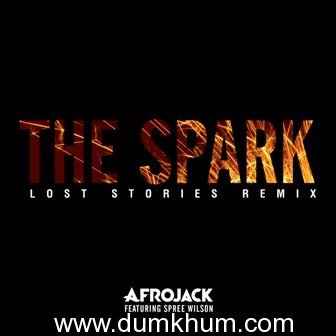 Prayag and Rishab a.k.a. Lost Stories was the first act to be launched on the Contrabands property – a joint partnership between Universal Music India, Hard Rock Café and VH1. Their debut album `Music For The # Generation’has been very well received by EDM fans making them highly popular names, not only on the Indian, but also the international EDM circuit. The Album was #3 on iTunes and under top 50 on Nokia Music. Lost Stories first single “How You Like Me Now” from the debut album was #1 on iTunes with the official music video crossing 100 thousand hits on vevo and charting #3 on VH1’s Top 10 playlist for weeks.

The latest feather in their cap – their officialremix of Grammy award-winning producer and DJ, Afrojack’s latest hit single “The Spark” ft. Spree Wilson. The timing could not have been better with Afrojack all set to headline this year’s edition of India’s most popular EDM festival `Sunburn’ in Goa where Lost Stories is also on the artiste’s line-up.

Says Lost Stories on the remix, “When we first heard “The Spark”, we fell in love with the simplicity and the feel-good-ness of the tune. However, we were totally mind-blown when our record label Universal Music offered us the opportunity to create an official remix of this massive Afrojacktrack! We are really happy on how the Lost Stories Remix has turned out and can’t wait for our fans to hear it as well!”

Drawn by the distinctiveness of their sound, Grammy nominees such as Nadia Ali, Andy Moor, BT and the world’s top most producers like Markus Schulz, Morgan Page have approached them for their remix skills. Top DJ’s of the world have extended their support to this fresh yet talented and popular duo. Besides, in India they have supportedTiesto, Steve Aoki, Nicky Romero and Avicii playing to over 15000 fans each.

Speaking on the occasion Devraj Sanyal, Managing Director, Universal Music Group& EMI Music, South Asia said, “Lost Stories `Music For The # Generation’ surpassed everyone’s expectations in terms of being South Asia’s first big EDM record trending hugely on all charts with the dominant #1 spot on the iTunes India dance charts. At UMG when we see this levels of acceptance it’s already time for us to take the game a level higher. Afrojack’s “The Spark” being officially remixed by Rishab&Prayaga.k.a Lost Stories is a monster statement for both my boys and my label having done something out of here that hasn’t been done before. It’s a sterling example of a label having faith in non-film and having the gumption to take music from Indie artists all the way up the value chain into the massive global EDM arena. We have spared no expense with the production of the track which I think is of global best in class standards and even mastered at the legendary Abbey Road Studios. This is a massive step for the EDM genre for South Asia and I’m dead sure that this single will be the biggest thing out of EDM thus far.”

The single will be released later this week exclusively on Universal Music across all digital platforms.