India’s gems and jewellery industry is a bright star of the economy, and one of the important foundations of the country’s export-led growth. It is a leading foreign exchange earner and one of the fastest growing sectors, which accounted for 14 per cent of India’s total merchandise exports during FY 2011-12. The industry has registered a remarkable growth over the last four
decades, with exports growing from US$ 28 million in 1966-67 when the Gem & Jewellery Export Promotion Council ( GJEPC) was established, to US$ 42.84 billion in FY 2011-12.

Diamonds : Undisputed Leadership
A major contributor to the creditable performance of the industry is the massive diamond manufacturing sector, which employs nearly one million people across the country. India exported cut and polished diamonds worth US$ 23.30 billion in 2011-12. 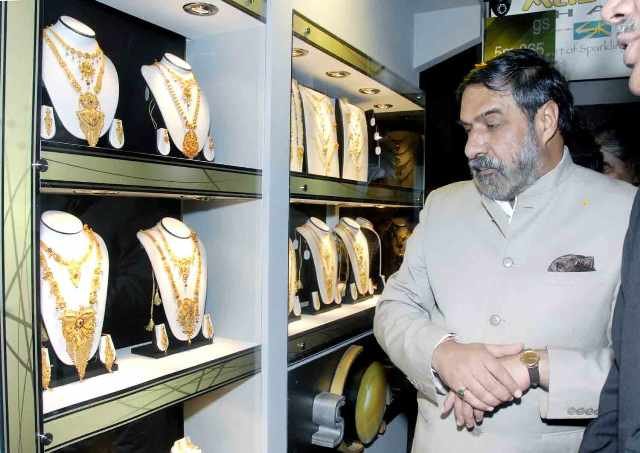 The industry has grown from its small origins in the ‘50s and has established itself as the world’s largest manufacturing centre of cut and polished diamonds for the last many years, contributing 60 per cent of the world’s supply in terms of value, 85 per cent in terms of volume. Eleven out of every 12 diamonds set in jewellery worldwide, are processed in India, mainly around Mumbai, Surat and Jaipur. This feat has been possible due to various factors.  At the forefront is the skill of the Indian artisan.  The relentless efforts of Indian entrepreneurs,
who took on the daunting task of setting up this industry, has contributed to its growth in no small measure. Indian diamantaires have gone on to create a marketing network worldwide, which is truly mind-boggling.  Added to this is the strong financial base of the industry and support of financial institutions of the country.

Today, after creating a niche for itself in the diamond world with small diamonds, India is developing skills for cutting and polishing larger stones and fancy cuts. Indian diamond polishing factories are on a par with the world’s best and are at the cutting edge of technology using laser machines, computerized yield planning machines, advanced bruiting lathes, etc.

Jewellery: Brilliant Impact
In the recent past, it is in the jewellery sector that India has made a brilliant impact, emerging as the fastest growing jewellery exporter in the world, averaging a growth of nearly 15-20 percent each year over the last decade. Exports of gold jewellery in 2011-12 touched US$ 16.5billion from just US$ 486 million in 1994-95.

However, the development of the branded jewellery segment is still in its rudimentary stage, mainly because the traditional jewellery has been dominated by home grown retail enterprises or the concept of the family jeweller. The Hall Marking of jewellery introduced by the Bureau
of Indian Standards to institutionalize global bench marking in quality assurance and to prevent against frauds will go a long way in building a reliable Brand India.  A few Indian jewellery brands like Tanishq and Gili are marking their global footprints, having entrenched themselves in the domestic market.

The Gem & Jewellery Export Promotion Council
The Gem & Jewellery Export Promotion Council, set up by the Ministry of Commerce and Industry, Government of India, in 1966, has played a significant role in the evolution of the industry to its present stature by effectively moulding the scattered efforts of individual exporters into a powerful engine driving the country’s export-led growth.  Today, the Council
has 5,300 members spread all over the country.

It also directly aids intra-regional investments by encouraging co-operation and joint ventures in jewellery manufacturing, especially in the various EPZs/SEZs created by the Ministry of Commerce which offer special facilities for Foreign Direct Investments in Jewellery units through foreign collaborations and partnerships.

The Government, recognizing the the inherent strengths of this sector in terms of its employability potential has taken major initiatives to strengthen institutional linkages.

Enhancing the skill levels of the workers commensurate with the requirement of the industry tops the agenda and two such centres are being set up at Domjur in West Bengal and Khambat in Gujarat.

The Government is also encouraging global partnerships and collaborative ventures for adopting a diversified approach in the jewellery sector. A collaboration with the Antwerp World Diamond Centre has also been sought to strengthen skills in diamond and gem stones grading, certification, research and development, cutting and polishing and setting up state-of-the –art training centres in India. The Jewellery week is followed by the India International Jewellery Show, which has grown significantly to become the second largest Jewellery Expo in the Asia –Pacific region. It has acquired the reputation of being the most prominent sourcing show in India, evincing great participation from exhibiters, exporters, buyers and trade visitors. The 29 th edition of the India
International Jewellery Show, which was inaugurated by the Union Minister for Commerce & Industry, Mr.Anand Sharma on August 23, has attracted participation of over 800 exhibitors with 1800 stalls, with exclusive country pavilions of Thailand, Israel, Turkey, Belgium and UAE.
More than 30,000 business associates are expected to visit the 5 day event being held at the Bombay Exhibition Centre in Goregaon. The organizers expect business upwards of Rs 5,000 crores at the exhibition, despite the recessionary trends worldwide.

The India International Jewellery Show represents an amalgam of the ingenuity of handcraft, skill, technology, innovation and creativity of our brilliant minds truly making India.

Looking ahead The global market for Gems and Jewellery today is over USD 100 billion with jewellery manufacturing dominated by a handful of countries, namely- Italy, China, Thailand, USA and India. Although India is the global factory of cutting and polishing diamonds, the trading hubs are located in the bye lanes of Antwerp and Belgium where this trade is shared by Jews and
Gujarati’s. The setting up of the Diamond Bourse in Mumbai –amongst the largest bourses in the world, at par with international standards is expected to ensure India’s strategic shift as a leading diamond trading market in Asia. The vision is to make India the Global Jewellery Hub and world’s one stop destination for diamonds, gems, gold and jewellery, in the years to
come.