GUARANTEED TO SPOOK YOU OUT! Welcome to the world of the living dead! Zombie mania is spreading across the world and India is the latest to embrace the fear stalking but moolah raking genre with 2 high profile Zombie films to hit the silver screen early next year!

BSI Entertainment & Kenny Media’s ‘Rise of the Zombie’ is already off the block, set to be the 1st Zombie thriller to release, with the post production of the film in its final stages. Luke Kenny and co-director Devaki Singh being experts in the Zombie Genre helped in having a clear vision and the clockwork precision to complete the film in good time. And Luke Kenny’s film ‘Rise of the Zombie’ is distinct from any Zombie film ever made in Hollywood, since unlike being a Zombie survival film or a Zombie comedy, it’s a Zombie Origin film. And the producers BSI ENTERTAINMENT and KENNY MEDIA are quick off the block on the marketing and merchandising opportunities this genre is most suited for with the youth of today. 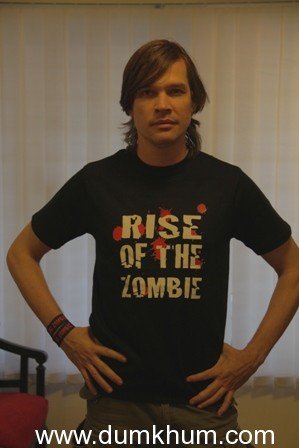 The makers have already put in place an ambitious plans for this ‘merchandise friendly’ film, since there are many takers amongst the target audience of this genre as it lends itself to the creation of related products or merchandising opportunities. And Bollywood merchandising has gained quite an acceptance amongst the young professionals and parents who want to associate with authentic merchandise as their counterparts in Hollywood. And also since the Zombie Genre is new in Bollywood, the producers have unveiled a massive campaign in licensing and merchandising to take this genre to a wider audience. Some of the innovative, exclusive and premium merchandise that will be available on www.splashmytee.com, the official merchandise partner of ROTZ, ahead of the movie release in feb 2013, includes:

ROTZ  inspires Zombie Theme Tees – Experience the thrill of horror on this lightweight Tee and express yourself in Zombese….

ROTZ mouse pad- Shock your friends with a unique zombie on your mouse pad! Get infected! Leave no survivors!!!

ROTZ I-pad covers- Steal proof your ipad with an abstract zombie! Only for the Urban Dead!!!!

Splashmytee.com has also partnered with www.tradus.com and the Zombie merchandise is available there too. More partnerships in the online space are on the anvil.

Says Co-director and writer Devaki Singh “Zombies maybe the walking dead but their contribution is huge in the merchandising economy. Zombie Economy has evolved from a cult following to popular culture and is worth 5.74 billion dollars, according to Wall Street estimates, and still counting!

Intact the latest is that the University of Baltimore, USA, has included a study on this worldwide phenomenon of the Zombie culture. And though Zombie genre is nascent in India, Zombism will be the next big trend in Bollywood”

BSI Entertainment is BUILD STRONG INDIAs maiden venture into the entertainment industry. The BSI group is one of the pioneers and market leaders of creating self-sustainable Townships in the mass housing segment with a development portfolio of 25 lakh square feet in and around the economic capital of the country. Presenting Feature Films to cinema-loving audiences, which are created with a strong sense of conviction, innovation and an independent Flair. BSI Entertainment is led by Abhijit A Mehta and Om R Sawant who are Entrepreneurs in the Mass Housing business within the traditional Real Estate business.BSI Entertainment’s first feature Film is called “Rise of the Zombie”, India’s First Zombie Origin Film produced in association with KENNY MEDIA.

Kenny Films, a division of Kenny Music Pvt. Ltd. is a production house seeking to tell cinematic stories that push the boundaries of the Indian theatre going experience, thereby reaching out to a global audiences. Rise of the Zombie is the collaborative artistic vision of multi-faceted Luke Kenny and Devaki Singh, unabashed fans of the Zombie genre and are looking to introduce and elevate the concept of Zombies, into a cult sensation in INDIAN FILMS.