INDIA’S BIGGEST STARS TO SET IIFASTAGE ON FIRE IN MALAYSIA The world’s biggest celebration of Indian cinema, the S-CROSS IIFA AWARDS will be held in Kuala Lumpur on Sunday, June 7th at the Putra Stadium. The Videocon d2h IIFA Weekend, which begins from June 5 will bring together the world’s largest film industry to celebrate the success and magic of Indian cinema with a song-n-dance spectacular entitled IIFA ROCKS, the IIFA Fashion extravaganza, IIFA Gala Screening of the much-awaited blockbuster, Dil Dhadakne Do and then the finale S-CROSS IIFA AWARDS. The S-CROSS IIFA AWARDS will be headlined by the biggest superstars Hrithik Roshan, Anil Kapoor, Ranveer Singh-Arjun Kapoor, Shahid Kapoor, Sonakshi Sinha, Parineeti Chopra, Shraddha Kapoor, Priyanka Chopra-Farhan Akhtar and Riteish Deshmukh-Pulkit Samrat. The S-CROSS IIFA AWARDS will be anchored by the “Gunday” duo Ranveer Singh and ArjunKapoor and promises to be complete with mischief, humour and repartee that will have the audience in splits.

The S-CROSS IIFA AWARDS and the IIFA ROCKS are directed by Wizcraft International Entertainment, choreographed by Shiamak Davar and will be broadcast for the first time on India’s leading hindi entertainment channel, Colors Viacom18. S-CROSS is the new Premium Crossover from Maruti Suzuki, coming soon, and will be revealed to the audience on the IIFA Awards stage. 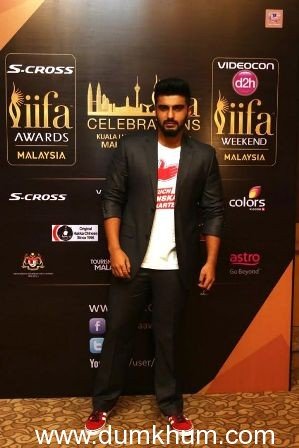 Colors Viacom18 will broadcast the IIFAs for the first time. Sharing the excitement of the film industry for the IIFAs, Raj Nayak, CEO, Colors said, “We at COLORS are delighted to be partnering with IIFA this year. Our sole objective is to take this International Awards ceremony a notch higher and honor the best and the brightest of the Industry. The friends of IIFA are already gearing up for some scintillating performances and chartbusting gigs with newer elements and themes. With all the efforts that’s been put in to scale up the show, we are certain that the mystique, vibrancy, energy and sensuality put together will make IIFA 2015 definitely a can’t-miss events on the calendar .”

On June 6th, as a major highlight of the Videocon d2h IIFA Weekend, the IIFA Fashion Extravaganza would be hosted by Neha Dhupia and Vivek Oberoi. The extravagant Fashion showcase would feature renowned designers, Masaba Gupta and Rocky S. The showstoppers for this lifestyle showcase include Bipasha Basu, Dia Mirza, Aditi Rao Hydari, Kriti Sannon, Mika Singh, Aftab Shivdasani and Huma Qureshi among others. Speaking about Videocon’s partnership with the IIFAs, Mr Aniruddh Dhoot, Director – Videocon  said, “Videocon’s association with IIFA is now in its seventh year. Our association with IIFA began on the foundation of mutual trust, commitment to quality and acknowledging the best. Today IIFA awards have established themselves as the best Bollywood awards in the country. Both, IIFA and Videocon d2h, believe in delivering excellence in the field of entertainment and adding variety to entertainment as a whole. Our recent listing on the Nasdaq stock exchange, bears testimony to our global outlook & tremendous growth. IIFA has proved to be a very good opportunity for us and we would like to take this association further”

Sabbas Joseph, Director, Wizcraft& IIFA said, “Every year we try to push the boundaries and create a brilliant cinematic experience that can bring fans closer to Indian Cinema. Arjun and Ranveer have an incredible chemistry on stage and they are going to have the crowds in splits with their antics. We have some of the best performers this year – Sonakshi, Shahid, Parineeti, Hrithik, Shraddha and Anushka – all set to create magic on stage and it’s going to be a night you don’t want to miss.” The IIFA ROCKS being held on June 5th at the Istana Budaya would be hosted by Ayushmann Khurrana and Parineeti Chopra. Performers include SonakshiSinha, Mika, Nakash, Jacqueline Fernandez, Aditi Rao Hydari, Lisa Hayden, Lauren Gottlieb, Javed Ali, Ankit Tiwari, Kanika Kapoor, Nooran sisters and MalaikaArora. The IIFA Technical Awards would be presented at the IIFA Rocks celebration.  On June 6th two key events would be held: The IIFA Gala screening of the highly-awaited blockbuster, “Dil Dhadakne Do” and the IIFA Fashion Extravaganza.

The film is a bitter-sweet comedy drama about a family that takes a trip which changes them forever. The ensemble cast includes Ranveer Singh, Anushka Sharma, Priyanka Chopra, Farhan Akhtar, Anil Kapoor and Shefali Shah. Dil Dhadakne Do is directed by Zoya Akhtar and produced by Ritesh Sidhwani and Farhan Akhtar from Excel Entertainment and Junglee Pictures.

Over the last 16 years, IIFA has left its mark on some of the most phenomenal destinations across the globe covering 4 continents and 11 countries. The celebrations have been hosted across the UK, Europe, Middle East, Southeast Asia, South Africa, Sri Lanka, Canada and the United States of America. The IIFAs were last held in Malaysia in 2002, thirteen years ago. IIFA is set to rock Kuala Lumpur with electrifying performances by some of the biggest and brightest stars of Indian Cinema at the action-packed weekend in June!

What started off as a one-night awards show has grown into a mega three-day weekend extravaganza showcasing the myriad magical facets that Indian Cinema comprises. The IIFA movement has taken the world by storm by highlighting the best of Bollywood during the power-packed weekend, filled to the brim with film-festivals, workshops, exhibitions, film-showcases and premieres, global business forums and sporting events.

Speaking on the association with IIFA, Mr Pankaj Munjal, Co Chairman and Managing Director of Hero Cycles said, “IIFA awards are one of the most eminent and widely popular awards for Hindi cinema. We are pleased to associate with this mega event as cause partners for our campaign ‘Cycling Heroes’. We believe this is a great opportunity to connect to a larger audience to spread the message of taking up cycling to lead a healthy and active lifestyle. Sedentary lifestyle of the present generation is one of the biggest causes of many lifestyle diseases. It is our endeavor to encourage people, across various age groups to take up cycling as their first step towards staying fit”

Carnival Group Chairman Shrikant Bhasi said, “We are proud to be associated with IIFA which has taken entertainment industry in India to international level. Carnival is the fastest growing group and we at Carnival Cinemas are committed towards taking entertainment to the villages, small towns and the metros in India and we will have a global presence soon. For us Carnival has just begun and IIFA is the platform to celebrate it.”

Speaking on the occasion Anil Kapoor, said “IIFA’s journey over the last 16 years has been incredible and I consider myself very fortunate to be a part of this phenomenon. Year after year the biggest celebration of Indian Cinema only gets bigger and brings new experiences to the film industry and fans alike. I’m looking forward to the IIFA Weekend in Kuala Lumpur, it’s truly a beautiful city and am certain that this will be a memorable IIFA as always.”

Hrithik Roshan commented saying, “Be it an award for my first film, my first international performance,  meeting John Travolta or bringing me closer to my fans across the world, IIFA has always played a special part in my journey. This year, IIFA is taking me to Kuala Lumpur and I am looking forward to the love of my fans there. Excitement is guaranteed by this celebration in our lives called IIFA.”

Shahid Kapoor spoke about IIFA 2015 saying, “I been a part of IIFA quite a few times over the years and each time it seems to get bigger and better. I’ve hosted on the IIFA stage and I’ve also performed and with every new IIFA experience I’m surprised at the novelty and excitement of the Weekend that continues to grow each year. I’m thrilled to be a part of this phenomenon again this year and I’m looking forward to visiting the incredible city of Kuala Lumpur”

Sonakshi Sinha commented on the occasion saying, “IIFA has been one of the most awaited events each year for me and also for the entire film industry as it’s the one time in the year where we all get together to celebrate over one incredible Weekend full of entertainment and fun. Last year I got to present my father with a Lifetime Achievement Award and that is one of my best memories at IIFA. It’s like an industry reunion and I’m so glad to be performing on the IIFA stage this year as well. “

With a viewership of almost 800 million, the IIFA Awards are India’s biggest media event and also among the world’s most-watched annual entertainment events.

Arjun Kapoor commented saying, “I’ve performed on the IIFA stage before and it’s been a great experience. IIFA is one of the most prestigious Awards ceremonies of the year and it’s a chance for the entire film industry to converge in one exotic destination to celebrate the grandeur of Indian Cinema. I’m looking forward to co-hosting the event with Ranveer and hope that it’s something the audiences will enjoy.”

Wizcraft International Entertainment Pvt. Ltd promotes the IIFA Weekend & Awards globally each year and travel to new, exciting and beautiful destinations, taking the film fraternity with it to unite and celebrate the best of Indian film and culture, thereby taking Indian Cinema& India to a wider audience. www.iifa.com