“Do Our Stories Reflect India’s Reality or picture which is larger than life?”

Film Writers Association, one of the premier &amp; pioneer associations held the “Fourth Indian Screenwriters Conference” titled “So near, so far”, which highlighted the best talents of the country. Ms Preeti Mamgain, who is the treasurer of FWA &amp; the convener of 4th ISC, spearheaded the conference. The idea which reflected was to bring together the screenwriters and other media dignitaries of the country to have one-on- one sessions, sharing thoughts and suggesting solutions regarding problems faced by the screenwriters in the current scenario.

Journalist Mr. P. Sainath, spoke insightfully about the ‘intersection of reality’ between the rural and urban India, and also presented some alarming statistics about the rural-urban divide in the country, in his scintillating keynote address for which he was given a standing ovation. The second panel discussed the topic ‘Serial Killers’, which drew attention towards ingenuity of TV content which was moderated by Saurabh Tewari (Ex Head of content, Fiction, Colors TV) and Imagine TV). TV Gods like Gaurav Banerjee (Deputy chief officer, Star India Pvt. Ltd.) and Ravina Kohli (Head of content, Epic TV), Purnendu Shekhar (Creator, Baalika Vadhu) and Ved Raj (Writer, Saathiya) participated in this session. Thoughts were exchanged about the disconnect between TV content and social reality and what can be done to improve it.

The last panel discussed an extremely important topic, ‘Writers &amp; Producers: Partners or Adversaries?’. It explored the with-and- without-you relationship of both. Moderated by Anjum Rajabali (Screenwriter, Rajneeti, Ghulam). He was accompanied by Ronnie Screwvala (Founder of UTV), Siddharth Roy Kapur (Managing director, Disney India) and Ritesh Sidhwani (Founder-partner, Excel Entertainment) as panellists. The sizzled discussion, concluded on a note of respect writers and producers need to have for each other’s work. Mr. Siddharth Roy Kapur quoted :  The Writers Conference, wonderfully put together by the Film Writers Association, is one of the most relevant and engaging initiatives that I have seen in the film industry in recent times. I had the pleasure of being on an invigorating panel moderated by the talented and indefatigable Anjum Rajabali, on which we discussed the Producer-Writer relationship. Going by the engaging and passionate interactions during the session, I am confident that this initiative will play a huge role in ensuring a continued dialogue on the opportunities and the challenges facing our industry, and how we can all best come together to address them.&quot;

Day two started with a session on Copyright issues, in which Mr. Anjum Rajabali advised the writers on improving the quality of their skills and polishing their scripts before submitting it anywhere. Veteran TV writer Vinod Ranganath (Swabhimaan, Mere Angne Mein), Sushrut Desai (Copyright lawyer) and Datta Dave (Tulsea: Talent management agency for writers) shared their expertise on writers’ rights: Are agents and lawyers the answer? One of the most informative and legally helpful discussion detailed new writers about the Dos &amp; Don’ts before stepping into a production house. 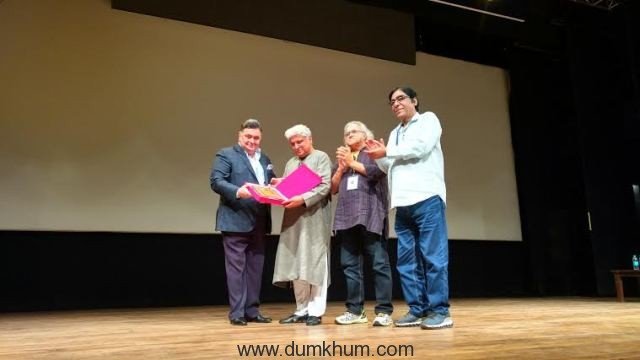 Further Mr Anjum Rajabali quoted “The aim behind holding the Indian Screenwriters Conference has always been two-pronged: academic and professional. The theme of whether our stories are getting increasingly disconnected from India’s realities compels introspection, so essential for writers. Aren’t we meant to also be the chroniclers of our times?  And, then, the Conference also addresses the screenwriting community’s concerns about writers’ rights, fees, credit, status and other professional issues. For that we had invited studio heads and broadcasters for a direct dialogue, this time.”

The next batch of discussion invited much loved panellists Shonali Bose (Margarita with a straw), Meghna Gulzar (Filhaal,Talvar), Ashok Mishra (Welcome to Sajjanpur, Well done Abba) and Rajat Kapoor (Aankhon Dekhi) with Neeraj Ghaywan (Masaan) as their moderator. They discussed the idea of ‘Little Big Films’ or the films which stand true to their content and quality but the box office betrays them. A need-of- the-hour discussion highlighted the issues this sector faces and the brave future of such films.

The next topic discussed was about ‘The Digital Explosion’ which was moderated by Manisha Korde (Writer, Malamaal Weekly, Bhool Bhulaiya) where she invited Biswapati Sarkar (Creative Director: The Viral Fever-TVF), Varun Grover(Stand-up comedian, lyricist and screenwriter-Masaan), Satya Raghvan (Head content operations, Youtube, India), Chaitanya Chinchlikar (Vice President-Business development, Whistling woods International) and Nikhil Taneja (Head of content &amp; development, Y-Films) This session emphasized on the power of digital content. The panelists urged the writers to befriend internet, claiming it to be the future of content presentation.

The last panel discussion of the conference was titled ‘The business of TV writing: Making of a TV writer. This attracted panellist Jayesh Patil (Kumkum, Bade Achche Lagte Hain), Shashi Mittal (Diya aur Baati Hum), Aatish Kapadia (Khichdi, Sarabhai v/s Sarabhai), Sonali Jaffar (Bahu Humari Rajnikanth), Farhan Salaruddin (Hum Pardesi Ho Gaye) and Raghuvir Shekhawat (Dialogue writer: Balika Vadhu) to the stage. Moderated by Vinod Raganath, the session explored the pitching aspect of a particular idea/script and what a writer needs to undergo before his work is approved. Filled with humour, the session also urged writers to believe in their rights as a writer and listen to what their conviction says.

Late Shri Vijay Anand, Late Shri Sharad Joshi and Late Shri Sahir Ludhianvi were ornamented with FWA awards of excellence. Honour and respect was paid to them as the awards were handed over to their family members and friends. Dignitaries Javed Akhtar and Rishi Kapoor graced the occasion and spoke kind words about the great legends and their brilliant contribution to the industry.

To sum up Danish Javed, Vice President of FWA recognised and credited everyone who made the event possible and deeply thanked the team immensely for the success of the event.