AVGC going to be next revolution; Govt to soon set-up National Centre of Excellence in AVGC Mr Apurva Chandra, Secretary, Ministry of Information & Broadcasting, Government of India today said, “We will be a $10 trillion economy in next 10 years. We should target that media and entertainment sector should grow to more than 100 billion dollars by 2030.” Addressing the two-day ‘FICCI FRAMES Fast Track 2022’, Mr Chandra said, “Ministry of Information and Broadcasting will do whatever it takes to support the media and entertainment sector and help it grow.” 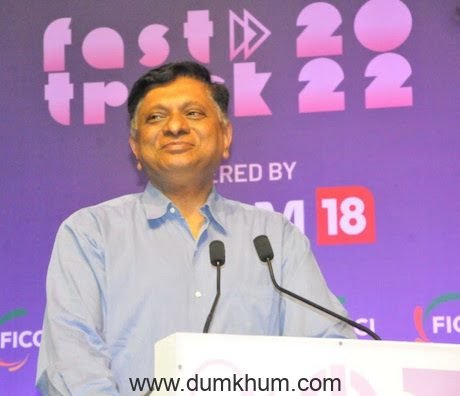 Expressing concern over declining number of theatres, the Secretary said that over the past 5-6 years, the number of theatres has witnessed a decline and we need to reverse this trend. “We will assign the Film Facilitation Office to work with Invest India to come up with a single-window portal for opening theatres, so that more and more theatres can come up and the public gets more avenues to watch films in theatres. We will also work with the states to create a Model Theatre Policy, so that the states can adopt and work on the same.”

Sharing with the industry that AVGC is the future, Mr Chandra further informed that the Animation, Visual Effects, Gaming and Comics (AVGC) Promotion Task Force constituted by the Ministry of I&B will submit the report within the next 15 days. “We are compiling the reports of the sub-Task Forces, and thereafter we will submit the recommendations and go through the process of adopting the report. AVGC is the next revolution like the IT revolution 20 years back,” he added.

He also shared that the National Centre of Excellence for AVGC is going to be set up in collaboration with the private sector. “We have taken an in-principle decision to set up the AVGC Centre of Excellence in collaboration with the private sector. The Ministry of I&B will function as a catalyst for the upsurge in the media and entertainment industry.”

Ms Tracy Brabin, Mayor of West Yorkshire, UK said, “We want to work with the talented and creative people to champion sustainability in the creative industries and the film industry, through investment, and support. We are open for business. We would like to invite you to get involved in our cultural festivals, to attend, but also to partner in the exciting programs of activity.”

“With the strength of the sector in the region, there are huge opportunities for companies from India to partner with our leading companies and invest in the region. The rewards are there for the taking and we will support you every step of the way. We want to deepen our relationship with creative India, attracting more investment from production companies, studios, post-production houses, and VFX companies,” added Ms Brabin.

Actor and Renowned Film Personality Mr Ranveer Singh said, “Entertainment options have opened up. There are new structures and entertainment. Media is constantly fragmenting, and we are seeing massive changes in entertainment consumption patterns. I believe we’re poised to adapt as we always have, to our rapidly evolving consumer habits.”

“The world has become connected more than ever before and we have the opportunity like never before to showcase our culture, our skills and our talents to the world. This coming decade is going to be the most rapidly changing and dynamic time ever in Indian entertainment.” He added.

Film Producer Mr Ramesh Sippy said, “As much as pandemic has affected the world, it has brought a whole lot of changes. The OTT platform has got a boom. Now both cinema and the small platforms will perform together in a much bigger way. The digital movement has reached a point where the correction can be made at one place and aired all over.”

FICCI Director General Mr Arun Chawla said, “We are all aware of India’s digital transformation. It has caused the number and importance of online media platforms to rise dramatically. The government has actively supported the media and entertainment industry, particularly through several initiatives to increase digitization and the creation of a digital communication infrastructure.

During the event, Actor Ranveer Singh was felicitated with FICCI FRAMES Achiever of the Year Award.