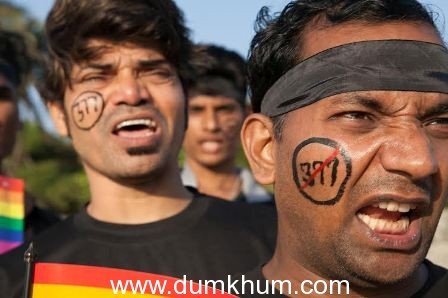 The documentary film Breaking Free on Indian LGBT community and its struggle against the draconian law Sec 377, is on a screening tour across the world. Having recently screened in Vancouver (Canada), Glasgow (Scotland), Maryland (USA) and New Delhi (India), this pathbreaking film will now screen at festivals in Manila, Prague, Beijing and Mumbai.

“The courts and government say that the colonial Sec 377 doesn’t affect the LGBT community as there are not enough convictions to prove it. Breaking Free provides concrete evidence how this law has been used and misused repeatedly”, says Rangayan.

Produced by Solaris Pictures, this feature-length documentary interweaves testimonies of gay and transgender persons who have been victimized or exploited, with wide-ranging interviews of advocates and activists across India. Breaking Free, offers an emotional roller-coaster journey of the Indian LGBT movement – from invisibility to empowerment. Rangayan has been invited to present the film on October 7th at the Quezon City International Pink Film Festival, Manila that is being held as part of the Diamond Jubilee Year of Quezon City (Philippines).

While Philippines has recently been ranked as one of the most gay-friendly nations in the world, and the most gay-friendly in Asia, Rangayan feels that total acceptance is still not part of Filipino culture. “There is tolerance, but is there acceptance? There is still widespread discrimination. Also attempts to legalize same-sex marriages has been overturned many times. We are bonded in our struggles”, says Rangayan.

Nick Deocampo, festival director of Quezon City International Pink Film Festival said, “As one of the judges in the Teddy Awards at the Berlin Film Festival this year, I was deeply impressed by the film Breaking Free. It will be the festival’s pride to show this impactful film and be graced by the director’s presence.”ami

Breaking Free, which recently received a clearance with no cuts from the Indian censor board, will have a special screening in Mumbai at the Godrej Indian Culture Lab on October 9th.

” We are proud to be screening Sridhar Rangayan’s Breaking Free at this event. It is a landmark film, a reminder of where LGBT activism in our country started, and why our country must keep on fighting the good fight for equality”, said Parmesh Shahani, head of Godrej India Culture Lab, which since its inception, has been at the forefront of creating a safe environment for discourse on LGBT issues, hosting about 30 events so far, on this theme. “The event on October 9th titled ‘Breaking Free – Life Gets Better Together’ continues in that tradition. We have put together an amazing programme along with Godrej’s Diversity and Inclusion initiative, that also features a panel discussion on why people need to be their whole selves, whether at home or at the workplace.”

“The film Breaking Free underlines that what the LGBT community is asking for is basic human rights, to live and love with dignity. This should not be denied to anyone in any country, by any law or government”, said Rangayan.