Rohit Khattar, Chairman of CINESTAAN Film Company hosted a dinner for the cast of MIRZYA.   It was a double celebration for him. Both – as the Producer of MIRZYA and also welcoming his award winning restaurant, “Indian Accent” from New Delhi, which has created a Pop-Up restaurant for a few days at Magazine Street Kitchen. Also present were Raveena Tandon and her husband, film distributor, Anil Thadani, who has partnered with Khattar to launch the overseas distribution company, Cinestaan AA Distributors.

Produced by CINESTAAN Film Company and ROMP Pictures, and releasing on 7th OctoberWorldwide, this ageless epic of MIRZA-SAHIBAN is brought to life by the Bafta Awards nominee & 3 times National Award recipient, the director of Rang De Basanti, Delhi-6 & Bhaag Milka Bhaag, Rakeysh Omprakash Mehra, in his inimitable vision, in the words of famed poet and lyricist Dadasaheb Phalke recipient and Oscar winner – Gulzar. The musical craft of Shankar Ehsaan Loy, Polish Director of Photography Pawel Dyllus, and National award winning editor P.S. Bharathi, all of whom come together to create a cinematic delight. “MIRZYA is Cinestaan Film Company’s first film and we’re celebrating the success of it’s music and bidding farewell to Rakeysh & the team as they go on the city tours culminating in the Red Carpet Premiere at the London Film Festival. I’m delighted that this occasion is being celebrated with cuisine from my restaurant Indian Accent in New Delhi”

MIRZYA shall be followed by two other films in collaboration with Rakeysh Omprakash Mehra’s, ROMP Pictures as well as KALAKAANDI, the Saif Ali Khan starrer written and directed by Akshat Verma, writer of Delhi Belly. 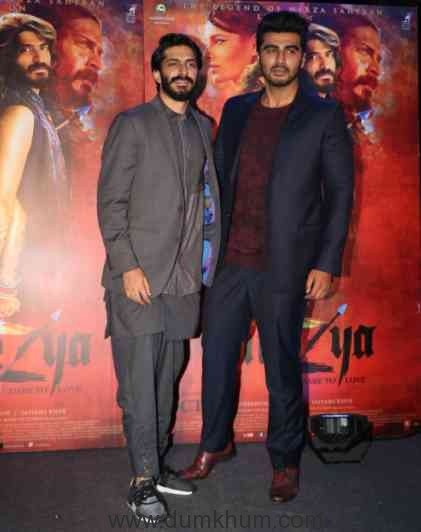 CINESTAAN Film Company (CFC), a boutique Film Studio, is committed to championing stories that resonate with both Indian and global audiences. By building a formidable international brand for Indian filmmakers, CINESTAAN strives to nurture and continue India’s rich cinematic legacy, supporting both national and international cinemas.

Indian Accent showcases inventive Indian cuisine by complementing the flavours and traditions of India with global ingredients and techniques. It is the only restaurant in India to feature in the World’s 50 Best Restaurants 2015, Indian Accent has been awarded the San Pellegrino Best Restaurant Award in India by Asia’s 50 Best Restaurants 2016 for the second consecutive year. It has also been rated as the No.1 restaurant in India by TripAdvisor for 2014 and 2015. It recently opened to rave reviews in New York too. The restaurant’s path breaking contemporary menu has been designed by award winning Chef, Manish Mehrotra.