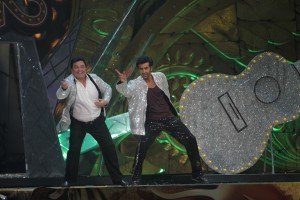 The most hyped and rightfully the most awaited performance of the year has been the sizzling father-son duo – Rishi and Ranbir Kapoor, at the Jaypee IIFA Awards Ceremony. As perfect as the performance execution looks on-stage, there was a minor mishap which may go unnoticed by viewers. The glittering silver jacket that father and son donned during their act, was not meant to be that tight for Rishi or that loose for Ranbir.

What actually happened was that the jackets were interchanged by mistake, but the father-son sportingly wore jackets which were tailor-made for the others size. As a result, Rishi Kapoor had to pull off the entire performance in a horrendously tight, body-hugging jacket while Ranbir Kapoor had to make do with a jacket which visibly looked too loose for comfort. Catch the Rishi-Ranbir performance dancing to famous tracks, Bachana Ae Haseeno, Om Shanti Om and many others only at the exclusive premiere of the Jaypee IIFA Awards 2012 exclusively on Star Plus on 7th July, 2012 as stars dazzle the IIFA green carpet at 7 PM and the main awards ceremony kick starts 8 PM onwards.