92.7 BIG FM, OFFICIAL RADIO PARTNER FOR THE ICC T20 WORLD CUP GEARS UP FOR ALL THE ACTION AHEAD 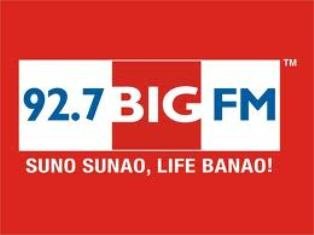 Mumbai,  92.7 BIG FM, India’s No.1 radio network and the official FM Radio Partner for the ICC World Twenty 20 tournament to be played in Sri Lanka from September 18, 2012 to – October 7, 2012 is all set to roll out some highly engaging and unmatched entertainment during the course of the world’s biggest cricket. As official radio partners BIG FM will deliver content with high audience engagement, this in effect, bringing immense value to the brands and advertisers who have associated with the radio station.

According to an official communication sent by the International Cricket Council (ICC) to the Association of Radio Operators for India, ‘the exclusive rights holders for radio/audio stream services across all mediums, including the internet in India are BIG FM and AIR’.

Another point in the statement reads, ‘Other than International Management Group (IMG) and its licensees, BIG FM and AIR, no entity operating or making available radio/audio stream services is entitled to use ICC Names, ICC Marks and ICC Proprietary Content, claim official association or commercially associate in any other way, either expressly or impliedly, including through marketing promotions, contests, advertising, score updates or other commercial activity (including by monetizing any of the ICC Proprietary Content), with the ICC or the ICC World Twenty20 Sri Lanka 2012.’

It further states, ‘Should your member agencies fail to adhere to the above, the ICC will engage with them to bring to their attention the permissible parameters of activity and work with them to resolve the matter. However, should such activities persist, your member agencies will be deemed to have knowingly breached the exclusive rights granted by the ICC to IMG and its licensees, BIG FM and AIR, and the ICC will have no other option but to initiate further action, including legal recourse.’

The biggest rider is that, ‘member agencies (of Association of Radio Operators) may not undertake any unlicensed commercial exploitation or selective commercialization of ICC Proprietary Content through third party sponsorship and presentation of the same.’

Strict action against channels which do not adhere to the stipulations laid down by the governing body will be taken this year.

BIG FM has laud this initiatives taken by ICC, Tarun Katial, CEO, Reliance Broadcast Network said, “In an extremely encouraging move, ICC has decided to come down on anyone misusing content to offer packages to advertisers. As radio partners, we look forward to offer consumers the best possible entertainment package with exclusive and highly engaging content, while offering marketers an approved and ethical platform by which they can reach out to their audiences.”