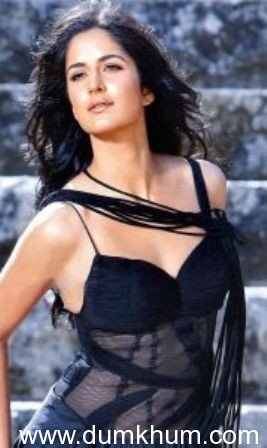 While Katrina Kaif’s last outing Jab Tak Hai Jaan was one of the biggest successes of last year ,the actress is now back with a bang with Dhoom 3 , one of the most awaited films of this year –

Voted the country’s hottest actress 4 years in a row, Katrina Kaif has temperatures soaring with the theme song of Dhoom 3 glamorously picturized on the actress. Sporting edgy couture be it the neon pink romper , skimming corsets and bustiers and knee high boots , Katrina looking her hottest best proves that she is back with a bang.

If that wasn’t all,the actress also has a string of back to back films next year – The action-romance Bang Bang with Hrithik Roshan, Kabir Khan’s gritty drama Phantom with Saif Ali Khan and Fitoor,a timeless love story.

Says a trade source, “Katrina Kaif  is making conscious decisions when it comes to her films stressing on quality and not quantity.She has created a unique space for herself wherein she comes shoulder-to-shoulder with the lead actors of the film and is already in the spotlight for Dhoom 3. Her releases next year too are amongst the most awaited , genres of which are extremely versatile from one another.Her growth has been unprecedented and she has constantly proved with every film that she is here to stay.Make way for Hurricane Katrina”.