Hrithik Roshan Shares how he Defeated Failure Through HRX Brand 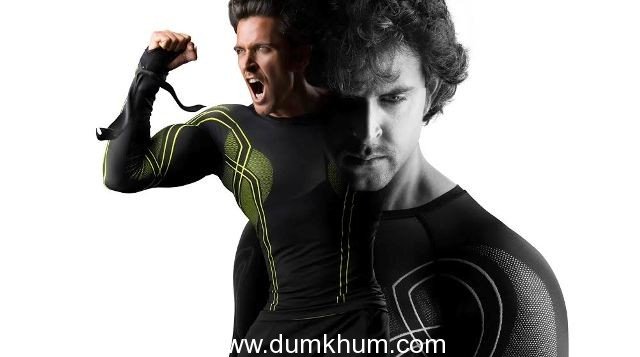 Indian film superstar and health advocate Hrithik Roshan has imbibed his ethos of fitness, fashion and fun by launching a motivational and stimulating film entitled: ‘Defeat Defeat’ to introduce his popular fitness and lifestyle brand HRX – Push Your Xtreme, India’s first celebrity brand extension project. The short film, which was produced in association with the co-founders of HRX, Exceed Entertainment and online retail partner Myntra.com, sees the ultra-toned and chiseled Hrithik Roshan connect with his legion of fans around the world, as he shares anecdotes and practical tips for achieving success, overcoming obstacles and pushing the boundaries of your potential.

Hrithik Roshan said of the idea behind the inspirational film: “Everyone including me has been defeated in life. But success comes to those who rise above defeat and understand how to deal with it. I realized that defeat isn’t a real thing, it’s just an illusion! A clever work of the mind. This short film is an attempt to spread this message and encourage people not to be afraid, not to give up and forget what failure means before you give victory a shot!”

Filmed in an abandoned warehouse, Hrithik Roshan impressed the crew with his dedication and stamina, as he shot bare bodied and at a stretch for over 21 hours.

Since the launch of Hrithik’s brand film recently, the campaign has received positive reviews across social platforms with millions of views. The campaign also witnessed Hrithik evangelizing his philosophy on Twitter, along with his fellow co-stars Sonakshi Sinha, Siddharth Malhotra, Arjun Kapoor, Uday Chopra and Sophie Choudry among others.

Hrithik’s apparel brand HRX, retailed exclusively on Myntra.com, is inspired by the superstar’s style and philosophy, created to not just reflect his stardom but also his incredible story of defeating defeat. Commenting on the launch of the brand, Hrithik Roshan said: “I always envisioned HRX to be a platform that could inspire people to bring out their best and to never give up. My team, Afsar Zaidi from Exceed has taken my philosophy and turned it into a brand. I am happy that we have been able to conceptualize and translate this adventurous spirit into great style and fashion through HRX”.

The HRX brand was conceptualized by Hrithik and Exceed Entertainment, a multi-platform entertainment management company, led by a dynamic team of industry experts in the field of integrated entertainment platforms. The company began as a consolidated talent agency managing and promoting the profile of some of India’s A-list personalities, including Hrithik, before diversifying into other verticals like Live Event Management, Sports Hospitality, Licensing and Merchandising, Digital, business ventures with artists, entertainment projects and marketing and consulting initiatives.

The model Exceed conceptualised for HRX, has positioned it as the first celebrity brand extension in India, thought-through and built in the same way heritage brands are in Western countries, where licensees will be appointed in different categories bringing in specific expertise. Cases include Jordan and Jay-Z, who experience annual retail sales of $700 million USD, to Li-Ning, the second largest sports company in China and Britney Spears fragrance, which has had over $1 billion USD sales worldwide.

Commenting on the launch of this campaign, Afsar Zaidi, Founder, Exceed Entertainment said: “The philosophy, the rules by which Hrithik leads his life has been rolled out in the form of brand HRX. For us, at EXCEED Entertainment, it was a challenge that we took upon ourselves to make it into a reality. ‘Defeat Defeat’ campaign is the message that HRX stands for – keep moving at all times.”

Enthused about launching the ‘Defeat Defeat’ campaign with Hrithik, Abhishek Verma, Head – Myntra Fashion Brands said: “It has been phenomenal working with Hrithik to develop this campaign. It encourages people to defeat the mental barriers that stop us from achieving our goals. We hope this brand film will be well received by his fans and others who have a strong passion for a healthy and positive lifestyle.” He added, “It’s been a year since the birth of HRX and today it is one of the leading brands on Myntra.com.”

HRX marks the second prominent initiative by Exceed in the merchandising and licensing space in India, the first being the model devised for India’s highest box office earner Krrish 3 in association with Dream Theatre. Ten different licensees were granted across various product categories, a first for any Indian film.