Here’s the poster of ALTBalaji’s new youth show ‘Puncch Beat’; and it features the awesome foursome of Rosewood High! 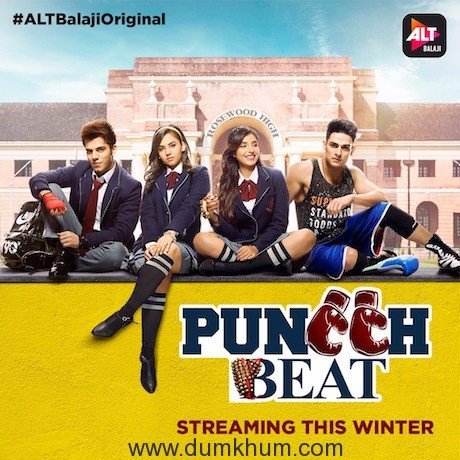 This week ALTBalaji announced it new youth show, ‘Puncch Beat’ starring the youth icon Priyank Sharma in the lead. The characters of the show or as they are popularly known now – The Rosewoodians, were announced in a week-long campaign with a teaser poster and then the individual characters were introduced each day; starting from Splitsvilla fame Siddharth Sharma to Harshita Gaur, the new find Khushi Joshi and the last of the lot, first look of Priyank Sharma was unveiled by none other than Ekta Kapoor herself on her social media handle.
Amidst the phenomenal buzz surrounding the show, the makers today unveiled a new poster of the show which features the awesome foursome of the Rosewood High School! One look at them and it’s obvious that these guys are here to slay for sure!
Since the announcement of the show, the buzz around it has been stupendous. From fan clubs to celebs to media; social media and the online chatter on the show and its updates has been overwhelming!
Revolving around the students of Rosewood High ‘Puncch Beat’ promises to be an extremely energetic show about  the students of Rosewood High School and their passion for boxing and dancing. It’s a story of two brothers, their identity , emotions, their feelings and their love.
Conceptualized and created by Vikas Gupta, ‘Puncch Beat’ is a youth drama set in Dehradun. The shoot of the show will commence soon and will be a one to watch out for this 2018.
Also starring in the show are Nikhil Bhambri, Amaad Mintoo, Kajol Tyagi, Gargi Nandi, Mrinmai Kolwalkar and Sindhuja. ‘Puncch Beat’ will be streaming this winter on the ALTBalaji app and website.