Hasee Toh Phasee springs a surprise at the box office. 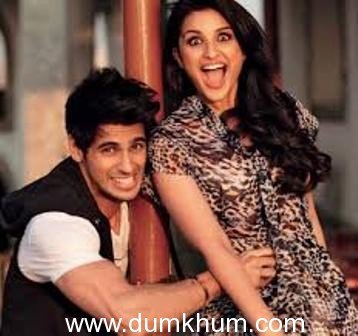 Aided by positive word- of- mouth and rave reviews from audiences and critics alike,Dharma Productions & Phantom Films’ Hasee Toh Phasee, opened to 18.5 crore ,with the current total of about 24.1 cr.

The film directed by Vinil Mathew starring Sidharth Malhotra and Parineeti Chopra , opened nationwide only to be received with unanimously rave reviews and a steady growth at the box office; with trade pundits now expecting it to do well in the second week too.

Says Karan Johar “ HTP worked because it has an individual voice and broke the standard formula”. Adding that “What’s worked for the film majorly is the chemistry between Sid and Pari.It has the audience cheering and rooting for them in the theatre and in return the audience has given the film much love,which is truly gratifying”.

If that wasn’t all,the film’s overseas collection too have been encouraging especially in centers like UK,UAE , US and Australia.

Says Taran Adarsh, “HASEE TOH PHASEE has emerged the dark horse in the international arena. Like SHUDDH DESI ROMANCE, which caught everyone by surprise, the opening weekend business of HASEE TOH PHASEE has also proved that a well-made film is sure to find acceptance”.

Say Mahesh Ramanathan ,COO Reliance, “We are delighted at the strong reliable numbers of the film in the overseas market .Reliance Entertainment released the film in 35 countries internationally.The impending success of the film globally stands testimony to how films can push above their weight when 2 powerful banners collaborate. The film collected over 1million dollars in the US over the weekend”.