Harper’s BAZAAR presents the fashion icon and star, as seen by herself, her co-star, her director, her family, her designers, and her friends

Sonam Kapoor, on herself “Everyone’s been asking me about my being invited to the fashion weeks abroad. When you’re the face of India, you’re excited about international fashion coming here. For example, in Delhi, people spend a lot on international brands. It’s exciting, because if people think you can be the face of India, it’s a big responsibility. You go abroad, and they say you’re an Indian actress and that is why we’re calling you, it’s like a dream come true.

“When I was in Italy (by the way, I love shooting there—I especially love the alcohol and the food), I got an invitation from the Ferragamo family. The shoe that was especially designed for me by Ferragamo is a seven-inch high heel with Swarovski crystals, with the Ferragamo bow.  As far as Roberto Cavalli is concerned, I have a relationship with the Cavalli family. They called me and I went there. I was the first person to wear their pre-fall collection, with perfectly matching hair and makeup.” 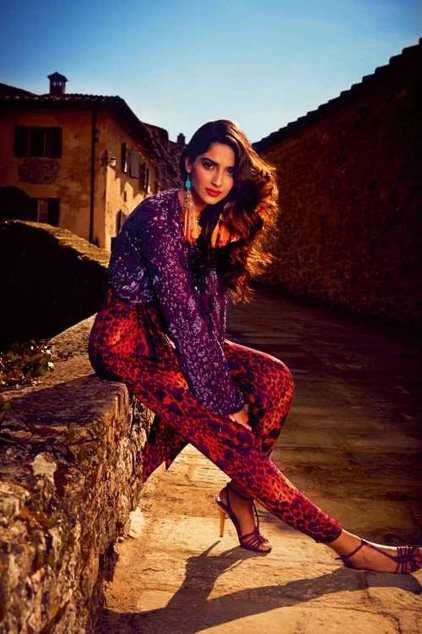 “Sonam is a mystery. On the one hand there is this aura that she has cultivated—that of a style and fashion diva—and on the flip side, if you spend time with her, she is this basic, simple, girl-next-door, who is happy wearing track pants and chappals. It’s strange, the sight of her when she’s in public, compared to when she’s not.

“What I found impressive about Sonam as an actor is that we’d be shooting a scene from multiple angles—for three or four hours you’re doing the same scene, the same lines—and here is this person who brings consistency to her work, from the way she talks, to her accent. She is a very consistent performer, which shows you it’s not happening by accident. Is Sonam one of the most significant actors of our times? I don’t know if Sonam herself would be comfortable saying that about herself. She’s part of a small group of actors on whom people are pinning their hopes to carry the face of the industry forward.

“In I Hate Luv Stories, Sonam had a mind of her own. She had a clear idea of her character, and how she wanted to play it. It was one of the most fun sets I’ve been on—from Sonam to the director, to the entire team—it was a young gang, a first or second film for most people, and it turned out to be one large, happy family.” 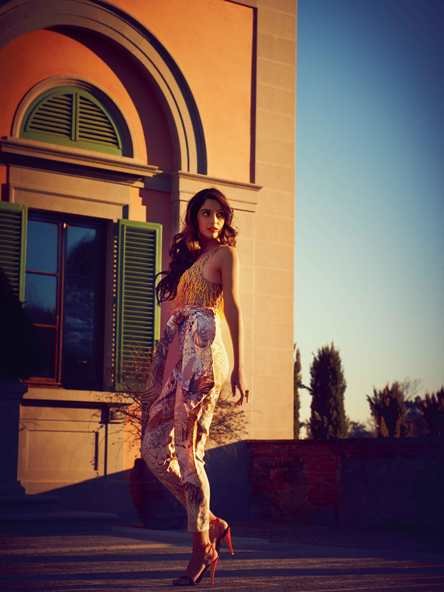 “I have a very good feeling about Sonam. In Delhi-6, we started our journey together. So we’re picking up from that point and going on. You grow as an actress and as a director. We were very happy with each other; I was very happy with her work.

“We’re currently shooting for Bhaag Milkha Bhaag, with Sonam in the romantic lead opposite Farhan Akhtar, and her role in the movie is not something I can talk about. Having said that, the part she’s playing will have huge resonance. It’s a delicate role, and at the same time it’s very strong. I have complete faith in Sonam. She’ll need to balance it out, because it’s so precious and fragile, so she needs to handle it with care. It’s not your run-of-the-mill kind of role.

“I relate to Sonam as a person, because you really can’t separate the person from the actor… If you study any great actor, the line is very thin between the person and the artist. Somewhere that reflects in your work. She is almost like nature, which can give you anything, but needs to be protected and is very fragile.

“When we work together, we spend a lot of time understanding the character. Preparation times involve long sessions on talking about the film, character, and readings. Once I feel it’s in her subconscious, then I leave it to her to interpret the role, and that belongs to her. So what she brings, and how she plays it is entirely her choice. But my job is to give the general direction.

“Sonam is very special; she’s just naturally talented. None of us know how talented she is, including myself, because we realise her potential as we go along. And when she plunges into deeper waters, that will be her playing field. Right now, she’s just dipped her feet in. She’s made to swim in the ocean; she’s not a pond girl. As for her future, how do you see the future of Indian cinema? To realise the potential of a Sonam Kapoor, we need to make more world cinema rather than the pop pulp that Bollywood does today. We have only just scratched at the surface of a Sonam Kapoor.” 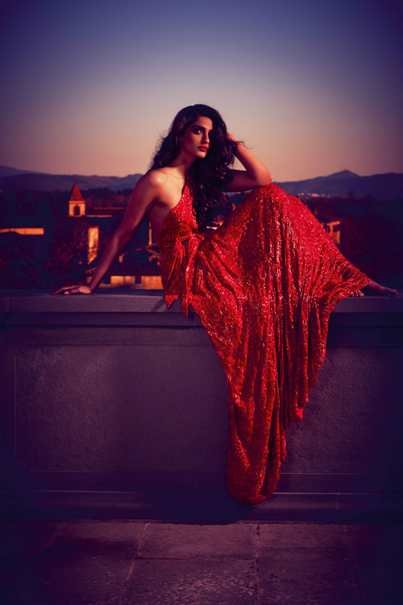 “It’s Sonam’s determination and focus that have got her to the stage she is today. Sure, she was a little gawky, but it took her a moment to get inspired, to get motivated. That could have been while she was assisting Sanjay Leela Bhansali for Black… something must have motivated and transformed her.

“She’s always had warmth in her since she was a child. We share a regular uncle-niece relationship. Our family is not the type that expresses emotion. In fact, I don’t remember my brother Anil (Kapoor) hugging me or me hugging Anil more than once or twice. And we are both are in our 50s! We share a close rapport, but it is non-demonstrative.

“At home, Sonam is absolutely normal and casual; she’s not prim and proper at all. She’s fond of her pets, and is very affectionate otherwise. Since her schooling in Singapore, she’s been a voracious reader. She gets involved in whatever she wants to do, and for immediate guidance relies on her parents. My advice to her is to remain focused, and as normal in her thoughts as she is now. The fashion is for the world outside.” 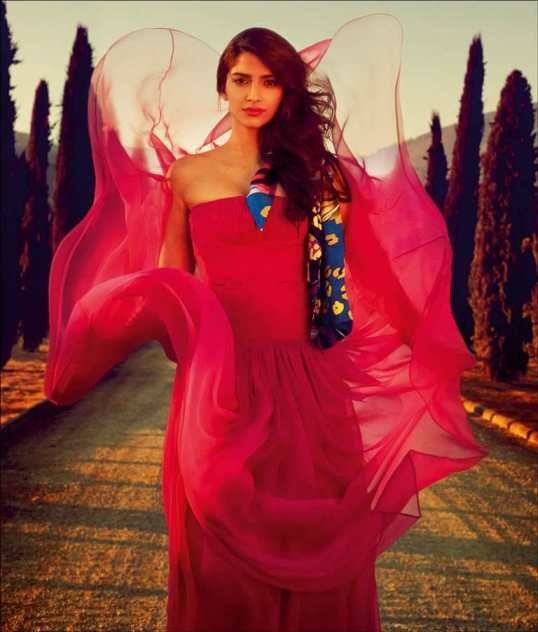 “I’ve known Sonam since I was a kid—we used to go to the same Kathak classes: me, Sonam, and Rhea. But we lost touch, and when Saawariyawas about to come out, I sent her a Facebook message. A year later, Rhea got in touch with me, saying she loved my saris, and that we should do something together.

“I never thought that Sonam would end up wearing my sari at the Cannes Film Festival, because it was a simple, understated sari, and she had lots of other options. The fact that she wore it—I got a text from Rhea in the middle of the night that she was wearing it for the L’Oréal dinner—was a big honour, because it takes years for designers to get actresses to wear their stuff on the red carpet. She was the only one who could have carried off that understated a sari to an event like that.

“Actresses shy away from saris, and even for our awards shows, everyone wants to wear gowns. But Indian women should realise they don’t always have the body to pull it off. Then you have bulges, and you look strange. The sari is made for the Indian woman’s body type. Sonam bust the myth that if you wear a sari, it must cost a couple of lakhs, and be in zardozi or net, or with diamante work. But the fact that this was a silk and net sari, in black and white, and very simple, didn’t go down well with most people. They said she looked underdressed and too understated. My saris, to be honest, did not sell before that. And now for the past two years, everyone just wants that one! She and Rhea are both people who have a lot of faith in my work. I owe a lot to them.

“I was first friends with Sonam’s dad, and now the joke is, the family’s taken over! Every time Anil speaks to me, he says, you’re not my friend anymore! But they are all very special people. As an individual, Sonam is very well-read, and well-travelled. She knows her mind, and has a heart of gold. I don’t know how someone can pack in so much in one person.

“I am both her friend and her designer. Ours is not just a professional relationship; we truly understand each other. She walked the ramp for me before she did her first film. I designed a bit for Aisha, then of course Mausam and Saawariya.

“Sonam’s a sweetheart. If she likes someone, she’s very vocal; she’s a clean-hearted person. She doesn’t have complications; she’s easy. And she cares about you. She is worried that you haven’t eaten. She says in the papers openly that she loves Anamika.

“Even though I read a lot on fashion and am aware of what goes on, Sonam is one person who beats me to it! Her knowledge on fashion is amazing and that awareness she incorporates so seamlessly into her sense of style.

“I took on Delhi-6  because of Sonam. We didn’t have one trip, or one story session with the director. It was over one phone call, with a brief describing what kind of girl she was. So the whole film came through over one or maximum two phone calls, and we managed to get the look. Sonam is one of those people who gets into the character. A lot of Indian films go wrong—suddenly you’ll see a little skirt on someone dancing in a village and the two don’t go together. Sonam’s a fashionista in her life, but she’s an actor first. Even in Mausam, she had to wear a burqa and didn’t fuss.

“I thought doing films was so simple, and then realised it wasn’t. But we did it so seamlessly, and managed to define a look with those printed salwar kameezes; it was a strong look that came out. We used cotton floral prints, and people did stories on the outfits. It was a pretty look for an Indian girl in that category, for girls to identify with. She was just one of them.

“Just to show you how spontaneous she is with her fashion: we were at the IIFA Awards, and she was meant to walk the red carpet. I was meant to do a fashion show there. There were gowns being sent to her from all the brands. Nothing was working out, and I was in her room. I had this one-shoulder toga dress with me, and I asked her if she wanted to try it. She did (just about everyone wanted it after that), and said, “You know what I need? I need this jadau necklace, and we’re going to call for it from Mumbai”, and in an instant, it comes, just like that. She said she had the shoes for that, and was going to buy the right bag. It turned out to be one of those looks that still gets printed all over the place. She’s so spontaneous; she is a fashion genius.”