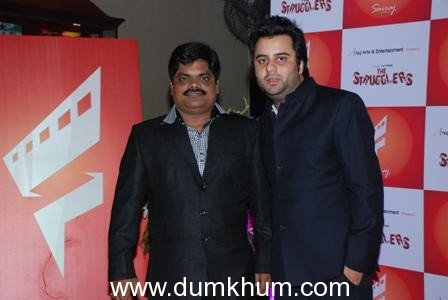 FROM BUILDING TO CREATING, SHANKAR NANGRE DOES IT ALL.

smitha gondkar was there too

shibani kashyap came in for a short while

banish dhar also complimented the event with his skills

Shankar Nangre was the hero and the highlight for the evening

dolly bindra added her charm with her presence

it was a well attended affair The second largest film industry of the world has contributed many talents – each brilliant in its own creative field. Very few, however, have enjoyed consistency in their creative endeavours and even fewer have managed to create an organization that has become an integral part of the entertainment business in India.

Shankar Nangre, owner of M/s. Shree Sai Developers and Builders has now ventured in the entertainment industry and is all set to make a precedence  to begin the journey his debut venture is  in Marathi Cinema, with the Film “Strugglers – Amhi Udyache Hero” starring Manasi Deolekar, Chinmay Mandlekar, Deepali Mandavkar, Sanjay Mone, Priya Arun, Prakash Dhotre, Sachin Ahute and others releasing 2nd November, 2012. Mr. Shankar Nangre , the name behind Sai Raj Films  and an institution in himself, is the founder and creative head of the company and it is his vision, which has catapulted the banner  to where it is today to set off – An illustrious entertainment brand that is known to every Indian in times to come . The firm, M/s.  Shree Sai Developers & Builders is a Proprietary firm owned by Mr. Shankar Nangre. The man with sound background and high vision of the future business, who have enthusiasm & capacity to pursue the dreams into reality. Shankar Nangre has forayed into the entertainment industry with a vision to bring a revolution with meaningful cinema,His next hindi venture bhaay-the fear will be a mega project to be announced this eve .

Shankar Nangre bring some conceptual films much alike his constructions.

The Event was managed and produced by innovatus entertainment network.