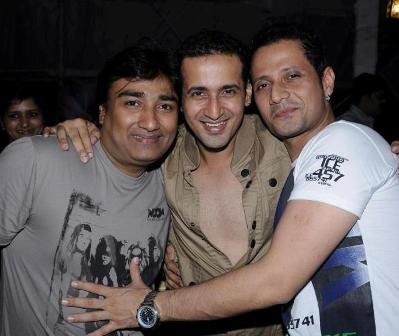 {Mumbai, India} –  Fresh off the success of Teri Shirt Da Button from “Kya Super Kool Hain Hum”, Meet Bros Anjjan are preparing to release their next movie hit this monsoon. The trio have been featured as guest composers for the film, Oh My God. In the movie, Actor/Producer Akshay Kumar plays the ominous Lord Krishna, for whom Meet Bros Anjjan composed “Mere Nishaan” for. This song is one of it’s kind due to God expressing his feelings of dismay about the current age scenario. The song was recently shot on Akshay kumar, at Horniman Circle, South Mumbai. Lyricist, Kumar has penned the meaningful lyrics for “Mere Nishaan”. The track has a sufi feel blended with western drums which adds a unique flavor to the song. The track also incorporates a subtle usage of flute and Indian percussion which gives a feel as if lord Krishna himself is talking. The trio has done justice to this composition, by beautifully materializing emotions into a song, sung from God’s point of view.

As per Meet Bros Anjaan, the opportunity to write “Mere Nishaan” for Oh My God fell into their hands due to the history they share with Akshay Kumar. After composing a song for Akshay’s past film, Speedy Singh, the actor/producer called upon the trio to jump back into another collaboration. Manmeet of Meet Bros Anjjan, discloses a personal moment, “ Akshay was moved to tears when he first heard “Mere Nishaan” and had fallen in love with the song. ” The harmonious relationship between the trio and Akshay Kumar has now extended into composing music for two more films. Adding to the soulfulness of the song, is the featured vocals by Kailash Kher and Meet Bros Anjjan. With the combination of Kailash’s vocals, Akshay’s passion and Meet Bros Anjjan musical composition, “Mere Nishaan” is meant to be a landmark of its kind, due to the amount of depth and meaningful message the song carries across, says Anjjan. As Meet Bros Anjjan concludes, “While composing, we always keep in the mind that the song should be easy on ears at all hours and shouldn’t be drowned out with noise”. Harmeet Singh from MBA says, Mere Nishaan is sure to bring a breathe of fresh air to radio.