Frames Film Festival 2020 in a Nutshell ! Frames Film Festival is an initiative by the BMM department of SIES (Nerul) College of Arts, Science and Commerce. Started in 2003, it has become a platform for talented filmmakers to showcase their artistry. Today, it is known as India’s largest undergraduate film festival. This year, the festival received over 3000 entries from 115 countries. Spanning over three days, the event includes screening of films of seven different categories, namely – International Short Films, National Short Films, Contingent Films, Documentaries, Advertisements, Animation films, and Music Videos. This year, the event was held on the 9th, 10th, and 11th of January and was powered by Zee 5, co powered by MTV Beats India and VH1, and co partnered by Kalpa Taru. Every year, Frames revolves around a theme. Last year, the theme was Directors Cut: An ode to the makers. This year, the theme is Naqaab: See The Unseen. With this theme, the aim was to offer recognition to the unseen parts of film-making and also celebrate them.

On the first day, the event commenced at 11am, and the inauguration ceremony was graced by former Miss India, Indian film, television, and theatre actress Poonam Dhillon, who visited the festival to promote her upcoming movie ‘Jai Mummy Di’.She appreciated the team’s efforts to have been such great hosts. “It’s so nice to be greeted so enthusiastically and that presentation (montage and ad of Frames) of your Frames was literally superb”. A new category was introduced this year – Theatre. The students showed commendable performances, which also addressed serious issues like equality, and political crises. Acts based on the theme of the festival – Naqaab: See The Unseen were also performed. Judges Dolly Thakore and Arvind Gaur gave their feedback to the performers. 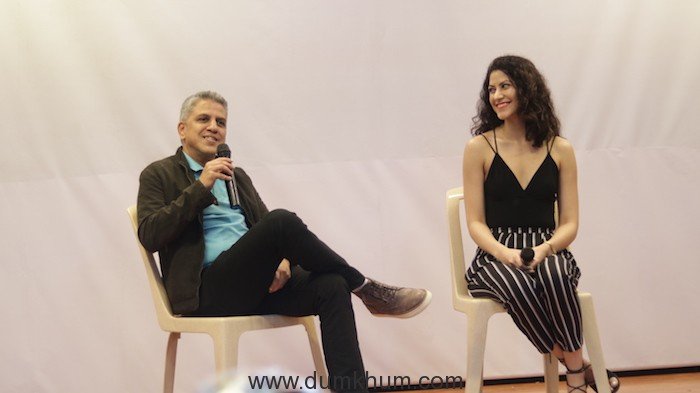 The first category screening of the day was International Short Films. Celebrities Zoya Hussain, Pawan Chopra, and ManjariPhadnis were present to judge the event. They spoke about how it is essential for young filmmakers to explore different fields, which can help them create stories and make films. They shared their personal experiences of working in films and encouraged the students to keep on making films and take up challenges.The last screening for the day was National Short Films and was judged by Farhad Samjhi, Yashpal Sharma and Vijay Lalwani. The film entries were sent from various states of our country.The judges spoke about how they were impressed that every film was unique in its own way and embraced the culture and diversity of India. Vivek Lalwani said, “the quality of the films is getting only better…some of these films were top notch quality… and at no point I felt these were youth film makers or amateur film makers” to which Yashpal Sharma added, “achha cinema paison se nahi, passion se banta hai”. These statements gained a huge round of applause from the audience. The second day commenced with the screening of the category ‘Documentaries’. The event was judged by Anil Chandel, Krishnakant Pandya and Brahmanand Singh. Important social issues like dowry and animal abuse were addressed through the documentary movie entries. Anil Chandel commented, “This is the best opportunity…this is the best time for you to explore this medium”. For the ‘contingent film’ category, the festival received entries from various colleges of Mumbai. Films about a plethora of issues were screened, including equality, self defence, and diversity. Movies based on the theme of the festival – Naqaab: See The Unseen, were also screened. Famous personalities like Harman Singha, Abhinav Shukla, and Pranay Pachauri, who were the judges for the event, appreciated the work of talented young filmmakers. Abhinav Shukla said, “Apart from telling a story in (a) short time, they’ve learnt to set up a team, which is very important”. The crew of the short film ‘The Letter- Unsaid Unheard’ visited the festival for a panel discussion. The short film was screened and the crew of the film spoke about the film. The team included director Deeshak Patra, cinematographer Ankur Hinge, writer Rasika Kushte and lead actor Gaurav Alugh. The story revolves around one’s affection with their homes and one of the crew members revealed the reason for choosing this topic was that home is a place which has seen and experienced every joy and sorrow of an individual. The last screening for the day was ‘Ad Films’, and the judges were Vivek Kamath and model Sakshi Shivdasani. The films were divided into two different categories- public service ads and commercial ads. Vivek Kamath added, “there’s a need, a zeal to improve and do better in terms of craft and content”. Both of them also talked about the current media situation and the future of advertising. The third and final day began with the screening of ‘Animation films’. The judges were Esha Agarwal, Kireet Khurana and Chetan Sharma. The judges appreciated the films and spoke about the increasing scope for animation in the industry. The last screening for the festival was ‘Music Videos’, judged by artists Shahid Mallya, Naitik Nagda and Pawni Pandey. Music videos of different genres, including Carnatic fusion, contemporary music, rap, and pop, were screened. The judges were very impressed by the videos, and appreciated the young filmmakers and musicians. They also sang a few of their famous tunes, and gave tips to budding musicians. Judge Pawni Pandey added, “The industry needs a more keen audience to magnify the talent in India”.

The final segment of the event was the award ceremony, in which the faculty awarded the winning filmmakers and stated the mark made by Frames 2020 by delivering some of the finest works from around the globe. The winners were felicitated and were inspired to make more films on topics which needed to be heard in present times. A pathway chosen by some of the most gifted filmmakers, Frames continues to elevate the already set bars of excellence and be an international success. It has rightly earned its place as India’s largest undergraduate film festival.