First Look of RGV’s much awaited RAI got unveiled ! The first look of RGV’s much awaited RAI was launched. The first look of Ram Gopal Varma’s most ambitious film “RAI” has got unveiled by Mr. Muthappa Rai on his birthday May 1st in the presence of thousands of people at Bidadi in Banglore. The first look of the Hindi version of “Rai” will be launched at a separate event in Mumbai very soon. RAI is being produced by Mr. C R Manohar(MLC) The Hindi version of Rai has been acquired by Raju Chadda of Wave Films and Sunil Lulla of Eros International, the Telugu version of the film has been acquired by Dasari Kiran Kumar and the Tamil version has been acquired by Ganga Raju, the president of South Indian film chamber.
The film’s tagline “The Greatest Gangster Ever” creates a lot of intrigue.
The launch of the first look of RAI was humongous; there were giant cut-outs along with a gigantic firework display and a LASER Beam Musical Show which revealed RAI’s First Look. The poster unveiling event saw a large gathering of celebrities and also eminent personalities from Corporate, Social and Political circles. 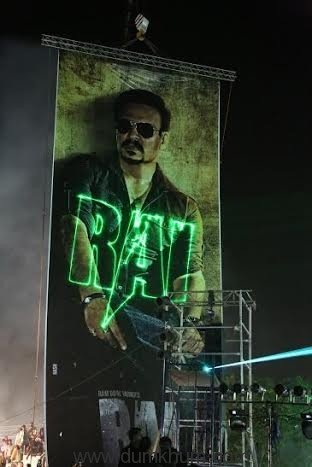 On this occasion Ram Gopal Varma said &quot;Any film maker is only as good as the subject matter he gets, With Rai I think I have the best subject matter I ever found in my entire career. In fact it’s so good that I will have to work hard to spoil it. Mr. Muthappa Rai has renounced his earlier life of violence and now became a peaceful philanthropist working only for the welfare of the people, but my request to him is that if I spoil such a great story as “RAI” he should go back into violence and kill me. RAI film for me is the story of an extraordinary man who lived, struggled and triumphed among extraordinary circumstances, it’s the story of an ultimate real life hero.
Vivek Oberoi said “In my entire life both as an actor and a film watcher I have yet to come across any character anywhere near to the character of Rai, it’s like a dream come true for me to take the challenge of portraying the complex nuances of Rai’s character. I thank RGV for giving me the opportunity to bring on to screen the greatest gangster ever! Called a criminal by some and a messiah by many he is the ultimate symbol of justice! Feared, Loved and Respected he has become a legend in his own life time and he is on the way to become something much more greater than a legend”.