witnessed the first look launch of the film “AMRAPALI”, a gripping cocktail of history mixed with patriotism, political conspiracy, love and detachment from world. It was a double whammy! It called for a double celebration with the first look launch the film and EID. In order to create the buzz about the film “AMRAPALI”, the makers decided to unveil the first look of the film. With the interesting star cast of the film, the audience is definitely in for another entertaining film under the banner “SHREE RAJLAXMI ENTERTAINMENT”. The event began with lighting of the  lamp by Giriraj Maharaj , and Ramdas Athwale garlanded the Lord Buddhas statute ,the female lead Jinal Pandya’s entry was in a pallaoinquin , followed by a traditional performance ,Lekh tandon who had earlier made the original Amarpali blockbuster film , crowned Jinal pandya playing Amarpali in Atul a garg’s film and Atul garg mentioned “today as Lekh tandon Ji himself crowned Jinal pandya ,is to reiterate our faith and give her responsibility of taking this legendary subject ahead and do full justice to it and I m privileged to be a part of this prestigious project .The first look of the film was unveiled 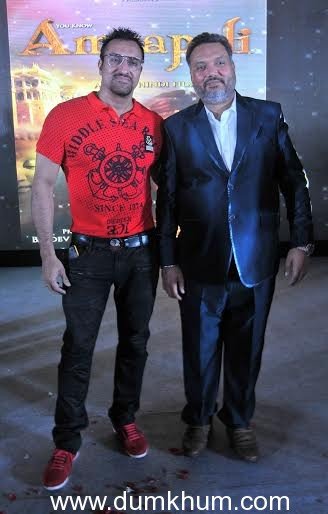 Producer of the film Baldev Singh Bedi exclaims “We are lucky to have films of different genres under our production house. After talking about friendship in our previous film, we will entertain the audience with our next release “AMRAPALI” which is cocktail of history mixed with patriotism, political conspiracy, love and detachment from world. We are burning the mid night oil to ensure the success of both the films and we hope the audiences thoroughly enjoys both the film”

ABOUT THE FILM: A gripping cocktail of history mixed with patriotism, political conspiracy, love and detachment from world.