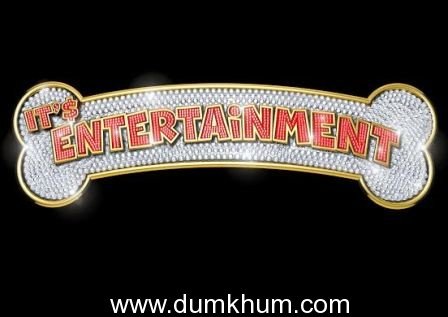 “It’s Entertainment” is Tamannah and Akshay Kumar’s latest comedy starring stalwarts of humour such as Johnny Lever, Mithun Chakraboty, Prakash Raj, Sonu Sood, and Krushna Abhishek. Produced by Ramesh taurani (Tips industries ltd) and Jayantilal Gada (Pen),  it is a movie with a message as powerful as the laughs!
A dog is the most loyal and forgiving friend one can ever have and this bond is best described in It’s Entertainment through twists, turns and laughter! This entertainer promises to tug at your heartstrings as it is packed with a powerful social message that respects and protects animals. From the writers of Singham 1 and 2, Chennai Express, Golmaal Returns, Bol Bachhan, brothers Farhad and Sajid  now don a new hat of directors with It’s Entertainment. This will mark their directorial debut.  First look Launch of Akshay Kumar’s upcoming laugh riot “It’s Entertainment” By Tips is scheduled yo be held  at a suburban multiplex tommorrow 19th june 2014.