To be released by DAR Film Distributors, the movie is set for a 4 April 2014 release One World Films today unveiled the much awaited first look and theatrical trailer of Girish Malik’s “JAL” at a special function. Produced by One World, in association with Clapstem Productions and NFDC, and distributed by DAR Film Distributors, the film is scheduled to hit the silver screen on 4th April 2014. JAL stars Purab H Kohli, Kirti Kulhari, Tannishtha Chatterjee, Saidah Jules, Mukul Dev, Yashpal Sharma and Ravi Gossain amongst others. Another key highlight of the film is that it marks the official debut of Sonu Nigam and Bikram Ghosh as music directors. The first look and theatrical trailer of the movie was launched at a special event held in a multiplex in suburban Mumbai. The event was attended by the Producer and Director Girish Malik along with Puneet Singh, Sumit Kapoor and Yogesh Mittal of the production company One World Films, Murli Chhatwani from DAR Film Distributors, Co-Producers Ajay Swami and Associate Producer Arun Tyagi, Sonu Nigam, Bickram Ghosh, the Cast and Crew of the film, media and key industry figureheads. The film’s poster is a piece of art. It captures all the elements of the film, skillfully balancing
them against the backdrop of the picturesque Rann of Kutch, giving a larger than life feel to the film. Taking the same tone forward, the theatrical trailer of the film opens with a wide scale shot of the enthralling, seemingly limitless Rann of Kutch, which hooks the audience in. The 2.30 min theatrical trailer is a visual treat that gives you a glimpse of the elements of the film. 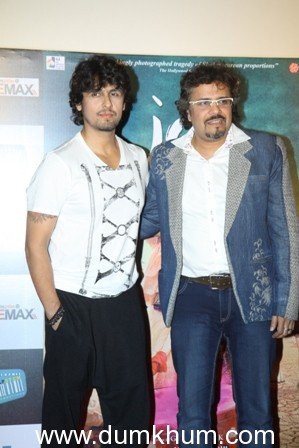 Speaking at the occasion director of the film Girish Malik said, “Jal to me is a project that is larger than life itself, the film, a wholesome entertainer is about human interaction and true love in all its honesty, albeit told in a very commercially entertaining way laced with rib tickling good humor. I have tried conveying the same with the movie’s trailer and poster.” Jal is the story of a young water diviner, BAKKA who is gifted with a special ability to find water in the desert. With the backdrop of water paucity, the film tells a complex and fascinating story of love, relationships, enmity, deceit and circumstances that bring about the dark side of human character. It is a high-octane, action- drama with a shocking climax. Shot on an epic scale, the film is a visual treat and has managed to capture ‘Rann Of Kutch’ like never before prompting even ‘The Hollywood Reporter’ to applaud Jal as “a breathtakingly photographed tragedy of Shakespearean proportions.” Jal was also the only Indian film to have made it to the prestigious in-competition segment of the recently concluded Busan International Film Festival and was also more recently the
official selection in the Indian Panorama section at IFFI Goa.