The 3rd FLASHPOINT Human Rights Film festival kicked off in the city on Thursday at the
Alliance Francaise, showcasing a wide range of films on human rights from around the world.

The opening film ‘Wasteland’ from Germany about camps throughout Germany where over
40000 refugees are housed for sometime upto 10 years in very poor conditions, and with the
threat of being deported anytime. The children are not granted nationality and grow up in a state
of limbo. The film’s director Anne Kodura asks some very pertinent questions, “Where do these
children belong? Why should they be deported by law from their home? What does it mean to
grow up in social isolation and what does the future hold for these children?” 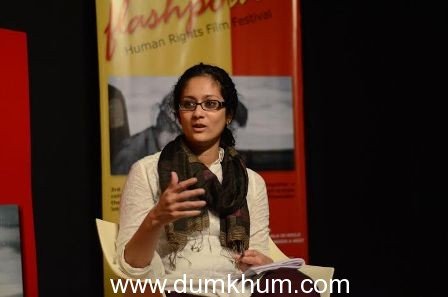 Vaidehi Chitre said, “As a documentary filmmaker, I am interested in human rights because
it is an intrinsic part of everything we do, every choice we make. Through films, I try to erase
the divide between ‘them’ and ‘us’ for the audience”. Talking about her film ‘Bottle Masala in Moile’ about the disappearing East Indian community in Mumbai and their land and sustenance
being snatched away from them, she said that it is amazing to see women take charge and lead
movements to defend their rights and property.

A similar movement was seen in the film ‘Every Bird Needs a Nest’ by Vincent Trintignant-
Corneau and Christine Chansou about the demolition of houses by the government who is hand
in hand with the realty mafia. Sending a personal message for the screening the filmmakers said, “The forced evictions in our movie talked to us also about India, she was aware of the problems that are happening in Orissa today. We hope governments will find a solution for these villagers who only want to be including with the development”.

Next at the festival, ‘No Fire Zone – Killing Fields of Sri Lanka’ was screened to a nearly houseful audience. Directed by Callum Macrae, who was nominated for Nobel Peace Prize earlier, but was refused a visa to come to India to screen this film in November 2012, said in a message, “I am particularly pleased that the film is being shown in Mumbai. As everyone in India knows, the events in Sri Lanka and the search for justice are not academic issues, but real live issues which need to be confronted now if human rights violations in Sri Lanka are to end and regional stability maintained”.

Taking the issues dealt with the film during the day head-on, the panel discussion series ‘Panel
@ Paanch’ at 5pm was aptly titled ‘Sarhad – Boundaries & Barbwires’. Modrator Jerry Johnson
kicked off the discussion saying, “How do we draw the boundary, the lines, to say this side is clearly wrong and that side is clearly right? Can we allow a space where we can say that perhaps we don’t know the truth, or that they could be a point of view”. Vaidehi Chitre, filmmaker echoed the sentiment saying, “I think because sometimes we don’t know much, there can be exploitation, it allows the law and the government to hijack a person’s opinion”. Author Murzbaan Shroff (Breathless in Bombay) said, “It is a manifestation of power, where the machinery is used to quash the individual. There is an apathy built into the government”. Linking
the human rights issues that was being discussed at the FLASHPOINT Human Rights film festival with the Supreme Court judgement on Sec 377 yesterday, moderator Jerry Johnson said, “Does the government have a right to intrude into people’s lives, can it dictate our identities?”. Benegal said, “The government should only act as a night watchman, it should not have any business in our bedrooms, in our businesses, and in our lives”.

The day ended with the screening of the powerful animation and live documentary ‘Camp 14:
Total Control Zone’ by Marc Wiese about the several prison camps in North Korea that house
20,000 to 40,000 people in them and heap unmentionable atrocities on them. The director in
a message said, “You can see these camps on Google Earth! You can really see it, with an absolute regular computer. How perverted in a way?… just imagine in the Second World War if you could see, live, the concentration camps? That’s the reality today”.

The 3rd FLASHPOINT Human Rights Film Festival runs from Dec 12th to 14th from 11am to8pm at Alliance Francaise de Bombay at New Marine Lines. Entry is Free and registration is at venue.