with Tanhaji The Unsung Warrior A Visual Monumental Splendour in 3D

✅
The Historical Monument which stands testimony to the valour of the Maratha Warrior Tanhaji Malusare is recreated to match the opulence one of it’s kind by specialist technicians led by Action Director Ramazan (Germany) and Visual Effects Head Prasad Sutar because VFX plays a very big part and adds grandeur to the overall execution of the period war drama.
It goes to the credit of the director that he started his narrative with the landmark Sandhan Valley encounter where Tanhaji takes on the Mughals head on so beautifully and brilliantly executed. The viewers will get hooked right from the word go.
Endowed with a body of steel, the courage of a lion and an agile mind, Tanhaji was also one of Chattrapati Shivaji’s closest aides and trusted lieutenants. Ready to lay down his life for his King and country, this Braveheart planned a Surgical Strike to recapture Kondhana from the clutches of the Mughals spearheaded  by Uday Bhan Rathod played by Saif Ali Khan who seems to be enjoying every bit of his character. His eccentricities, unpredictability, Craziness , madness are all manifested in his demeanour. The film covers the journey of Tanhaji Malusare a Maratha Warrior who fought bravely for his motherland. Tanhaji went to war armed only with a handful of Marathas.  If the Mughals had muscle power, Tanhaji had sharp acumen. The Magnum Opus encapsulates one of the toughest wars fought by the Marathas. It focuses on various facets of Tanhaji ‘s life an exciting personality in the Maratha History. Trusted warrior of Chattrapati Shivaji Maharaj and his heroic act of winning the Fort of Kondhana against all odds. Tanhaji ‘s wife Savitribai who is strong and amazing is played by Kajol who adapts to the character dressed in traditional Nauvari Sari looking every bit a Maratha Queen. Having a Marathi background in her great grandmother Ratnabai Shilotri and grand mother Shobhana Samarth  she pulls of her role of Savitribai who was not only strong but had the ability to maintain her dignity in the face of adversity which she has delivered with aplomb

Ajay Devgn as Tanhaji Malusare fits the bill every inch of it by displaying one of his bravest and most astute portrayal of an Historical Hero a warrior who fought several battles alongside Shivaji Maharaj in the 17th Century. His chemistry with Kajol is indeed very soothing and pleasing to the eyes

in their character of Tanhaji and Savitribai.
Sharad Kelkar as Chhatrapati Shivaji Maharaj looks impressive as the Maratha Lord and acts the same with maximum impact. Especially the scenes where he shares his strong relations with his mother Rajmata Jijabai and his interactions with Tanhaji are very touching and beautifully picturised.
Devdatta Nage as Suryaji Malusare and Shashank Shende as Shelar Mama do their best and lend credence to the narrative.
Theme song “Ghamand Kar”, celebrates the spirit of the film. With some hard-hitting lyrics and haunting background score, the song is sure to live with the audience for a long time. 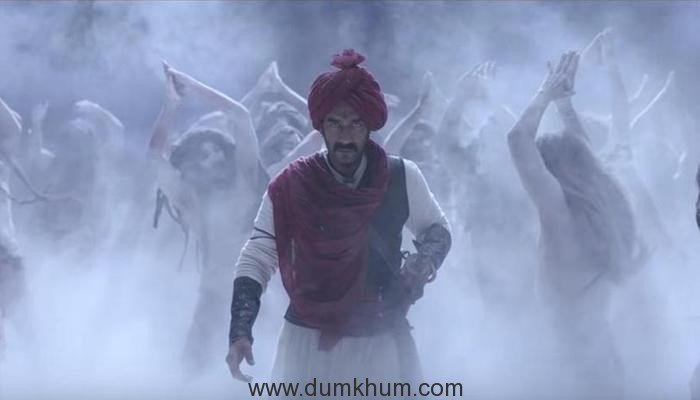 Musical track “Maay Bhavani” showcases the celebration of the festival of Shimga ( of light & Colour ) as celebrating Shimga marks an important moment for Tanhaji in his life.have caught the attention of moviegoers everywhere. The track composed by Ajay Atul and sung by Sukhvinder Singh and Shreya Ghosal penned by Swanand Kirkire is very nicely shot. “Shankara Re Shankara “ & “Ghamand Kar “ which virtually takes you back in the 17th century will attract the attention of moviegoers everywhere. Extravagantly choreographed and picturised it lends the flavour and color of those times. The song has music by Sachet – Parampara who are also the lead singer of the song. It has lyrics penned by Anil Verma.
With today’s impressive 3D technology, the fort has been brought to life to create a breathtaking setting for the epic battle scenes in this Om Raut directorial. Ajay, who plays Tanhaji in the movie, and Saif Ali Khan as Udaybhan Rathod have pulled off the difficult battle scene interspersed with elaborate stunts in the movie.
Without succumbing to western, modern action stunts Om Raut having a strong Marathi bearing stuck to a true grounded and very much Indian Warfare paraphernalia resonant with the 17th century era on display, thereby making a chapter in History Books

not meant for the small screen