NFDC Film Bazaar which is going on in Goa and the last date of which is 24th November 2012 did not allow a well known PRO turned film Director Harish Sharma to enter the viewing room of the film bazaar where 3 of his movies were been screened. 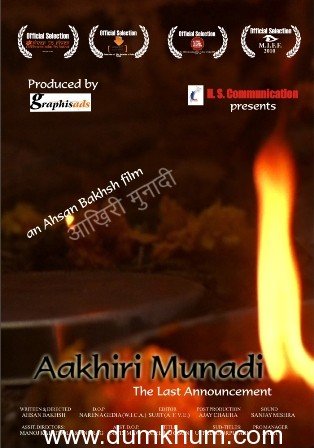 a documentary “A soldier becomes a Monk” and the third one a supernatural feature film “2 Nights in Soul Valley” which is to be released on 28th December in theaters, were playing in the film bazaar viewing room.

According to Harish Sharma he landed from Kolkata to Goa on 23rd November evening, and went straight to Hotel Marriott, where NFDC film Bazaar is going on. He wanted to go into the viewing room to see the response on his films and how NFDC had put his films in that section. He met a girl from NFDC and told her about his three films and she promptly replied “Oh! You are Harish Sharma”. “Thinking that I was the only one to send 3 films in Film Bazaar the girl remembered me and I was very happy,” says Sharma. Even after informing the girl that his movies were screened in NFDC, Sharma was told to register first. “Then I went into the registration room where there were two gentlemen, I repeated my words again and told them about my 3 films in viewing room. I told them that I just want to have a peep on how NFDC is showing my films, on this they handed me a form to fill and also said that registration fee is Rs. 10,000.I was shocked on hearing this and I told them that tomorrow is the last day of film Bazaar and inquired why I should pay Rs. 10,000 to watch my own creation. I even told them that I do not wish to see the whole movie, but just a glimpse of it yet they did not agree,” reiterates Sharma. On inquiring the process if any of the journalists wished to watch the movies, they said that the procedure to enter the viewing room is same.

The incident had the director fuming on the mismanagement and corruption practiced in a film bazaar like NFDC. Though Sharma left the NFDC Film Bazaar, however he could view the films in INOX where the regular films screening is going on.