Mumbai: FLO, the women’s wing of FICCI whose raison d’etre is Women Empowerment, has been instrumental in establishing and conducting the very prestigious WOMEN ACHIEVERS’ AWARDS since the past four years. FLO Bombay Chapter has also been a trendsetter by having the very first nationally televised FLO Awards. The awards have had several partners over the years but have been awarded to industry doyens and have been well attended by eminent personalities.

This year, FLO – Bombay Chapter, in conjunction with the Golden Maharashtra Development Council conducted the EXCEPTIONAL WOMEN ACHIEVERS’ (EWA) AWARDS felicitating eleven women from Maharashtra who have been the FIRST to reach the pinnacle of success in their respective fields. 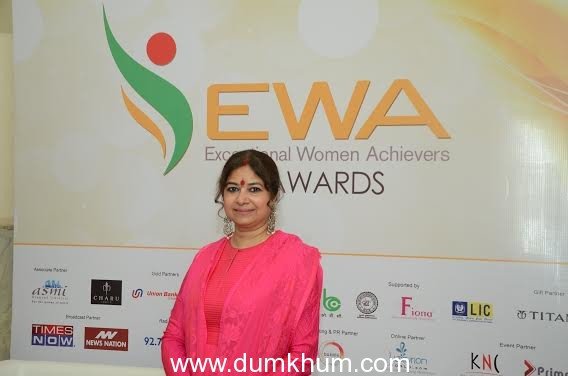 The Award winners were honored by top leaders & popular personalities such as Anupam Kher, Jackie Shroff, Abhay Deol, Ajit Ranade, Sushil Jiwrajka, Prahlad Kakar amongst several others and most importantly presided by the Governor of Maharashtra – Shri K Sankaranarayanan and Chief Minister of Maharashtra – Shri Prithviraj Chavan who stated that the event focused exclusively on the Exceptional Women Achievers of Maharashtra, which showcases that, when the Indian women are empowered, they can achieve heights of excellence. Hopefully, this subtle message will bring about a mind change and spell hope for the girl child in Maharashtra. Partnering the event and cause with FICCI Women’s Wing – Bombay Chapter has been Golden Maharashtra and Mr.Vinod Gupta – President, expressing his views says, “In our rich culture be it the Goddess of Strength(Shakti), Goddess of Knowledge(Saraswati) and Goddess of Wealth(Laxmi) all are women and thus our women are the source of Creation & Nuture in our world. Ours is an initiative to be acknowledging the great work our women today are doing in several fields and we will continue to take this to newer heights year after year.” The event also marked the launch of the Golden Maharashtra Website which was unveiled to all in the presence of an august audience of 500 plus who are invites and special guests who have been supporting the cause.  The ceremony will have beautiful musical performances by very popular Rekha Bharadwaj & Singer Madhushree.

FLO, the women’s wing of FICCI, was established in 1983 with the prime objective of women empowerment through the promotion of entrepreneurship and managerial excellence. As an all India forum for women, FLO has members comprising of entrepreneurs, professionals, executives and others wanting to contribute to developmental initiatives.

Over the last 30 years of existence it has grown as an organization and today it is one of the most prestigious pan-India business organizations with 11 chapters and over 3000 members across India.

The dawning of FLO Bombay Chapter took place in 2002. Degree by degree FLO Bombay has unfurled into a force to be reckoned with.

Over time and distance, the equal rights of women have progressed. We celebrate the achievements of women while remaining vigilant and tenacious for further sustainable change.

And that’s the roadmap FLO Bombay Chapter! Our programs are an ensemble of Leadership, Grooming for Excellence, upliftement of the underpriviledged and sharing experiences. Our CSR initiatives include EDUCATE THE GIRL CHILD, Grameen Initiative for Women, Swayam (online helpline for entrepreneurs) and the sanitation Project!

Women are becoming part of the national resurgence towards development in all spheres. Although they are making a significant contribution their work goes largely unnoticed. No one realizes this better than FLO.

Today’s event focuses exclusively on the Exceptional Women Achievers of Maharashtra. We wish to showcase that, when the Indian women are empowered, they can achieve heights of excellence. Hopefully, this subtle message will bring about a mind change and spell hope for the girl child in Maharashtra.