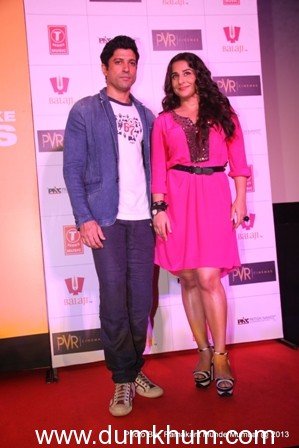 Farhan Akhtar plays struggling musician Sid in Shaadi Ke Side/Effects who takes on work as a jingle writer-composer to pay his bills. Everybody knows that Farhan loves music and his guitar, which is why this part of playing Sid was special to Farhan.

Ofcourse nobody had a clue that Farhan was going to put his own spin to the featured jingles! Director, Saket Chaudhary, and the brand team of Skore condoms, an in-film sponsor in Shaadi Ke Side/Effects whose jingle Farhan’s character in the film was supposed to sing within the film were in for a surprise when Farhan added to the lines of the jingle to include ‘I love my mother-in-law!’ referring to Rati Agnihotri who plays Vidya’s mother in the film!

Ofcourse, this part has now been edited out of the film. But Producer Rangita Pritish Nandy says ‘Watch out for it in the gag-reel at the end of the film!’

Producer Rangita Pritish Nandy says ‘This was massively funny while we were shooting! The whole unit cracked up and we almost kept it in the film as well but then decided against it. But watch out for it in the gag-reel at the end of the film which also features the reprised version Tauba Mein Pyaar Karke Pachtaya now re-christened Tauba Mein Vyaah Karke Pachtaya!’