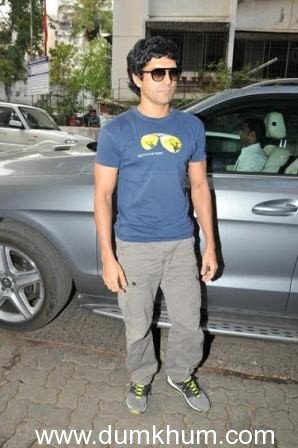 The makers of ‘Hawaa Hawaai’ have released the first in a series of ‘The Dreamer Videos’ showcasing celebrities from different walks of life, speaking about their dreams and journey towards fulfilling them. The first video of the series revolves around the well-known writer, director and actor Farhan Akhtar.

Sharing his childhood memory, actor Farhan Akhtar says, “When I used to sneak into my father’s study… there were couple of Filmfares that used to be lying on the table, and a friend of mine and me would sneak in there, and we’d pose with those trophies and, you know, wave to the crowd, pretend that we won a Filmfare award. So when I went up on stage and collected it, it really took me back to that moment. It was a very surreal fulfilment of that dream.” The video showcases Farhan Akhtar talking about his aspirations and his dream of making his children proud.

The story of ‘Hawaa Hawaai’ is about the remarkable journey of a poor boy ‘Arjun’, rich with dreams, as he tries to achieve his goal of becoming a champion Inline Skater. The movie stars Partho Gupte as Arjun, an in-line skater and Saqib Saleem as his coach. Presented by Fox Star Studios and written, produced and directed by Amole Gupte, the film is slated to release on 9th May, 2014, and is touted to be the first film on in-line skating in the world.