FARAH KHAN AND BELA BHANSALI SEHGAL WISH LISTENERS ON THE OCCASION OF NAVROZ AT 92.7 BIG FM

REACH OUT TO AUDIENCES WITH RJ ANKIT, ACROSS 45 CITIES TO PROMOTE THEIR FORTCOMING FILM SHIRIN FARHAD KI TOH NIKAL PADI

India’s No. 1 Radio Network and Broadcaster of the year at the Golden Mikes Awards – 92.7 BIG FM saw two special visitors this Navroz when Bollywood’s newest ‘leading lady’ Farah Khan and director Bela Bhansali Sehgal popped in to the studios to promote their soon to be released film Shirin Farhad Ki Toh Nikal Padi. 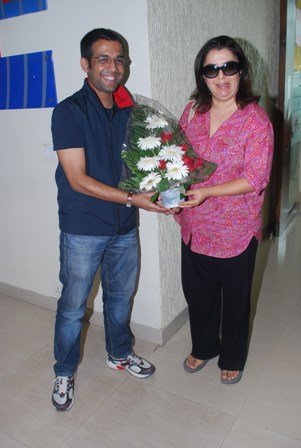 Farah, well-known for hits like Om Shanti Om & Main Hoon Na as a director is now making her foray into acting, alongside actor-comedian Boman Irani. This lovable comedy based on a Parsee couple caught on the wrong side of 40s, is all set for release on 24th August 2012. In a bid to reach out to audiences across all demographics, Farah chose India’s largest radio network 92.7 BIG FM to promote her film.

Along with RJ Ankit, Farah and director Bela Bhansali Sehgal interacted with listeners on several topics. They received hearty wishes for Navroz and some valuable feedback on what the audience expected from the film. This heart-warming comedy is about two people who find love unexpectedly at the age of 40. Focusing on the unique Parsee brand of humour, this film is sure to keep audiences in splits in true Bawa style.

Speaking on the radio interaction with audiences, Farah said, “I’m so happy that I got this chance to really connect with my audience. I hope that I have given them an idea of how much fun this film is actually going to be. She further added, “Love does not recognize age; it can happen at any time. Once you cross 40 it doesn’t mean you’re past your expiry date, you can still fall in love.”

“40 is unfortunately regarded as the cut-off age for marriage and relationships. Once you turn 25 even your parents give up hope, this film will bring new hope to people who feel this way. It’s a wonderful story that shows the ability of love to transcend the obstacle that age poses and allows people to find it at any age.” added Bela Bhansali Sehgal 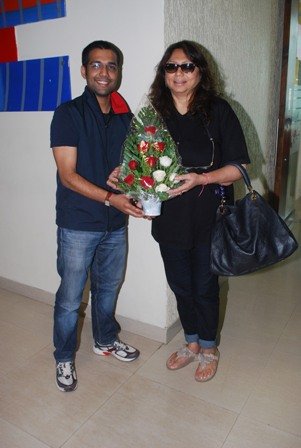 Commenting on this visit, the company spokesperson said, “It was a pleasure to have Farah and Bela at our studios today. We are sure that our listeners across 45 stations got a feel of what to expect from this much awaited movie. It goes without saying that there is a huge expectation from the very unique pairing of Farah and Boman. We are confident that this movie will be very successful in the Box Office and would like to wish them all the very best.”