Events like the ADHM are perfect platform to encourage athletics, says Bailey 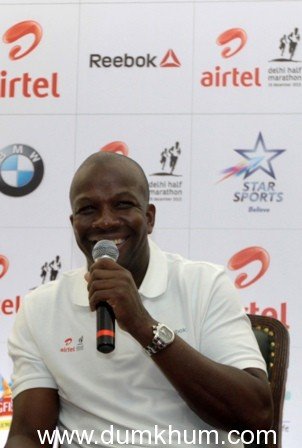 “Events like the Airtel Delhi Half Marathon are a perfect platform to generate interest towards athletics. India is a huge country, it’s just about developing the running culture and with appropriate infrastructure and professional training, Indians can definitely produce Olympic winners,” said Donovan Bailey, 100m Olympic and World Champion and 100m World Record holder and the international event ambassador of the Airtel Delhi Half Marathon at the Meet & greet session at the Jawaharlal Nehru Stadium, here, on Friday.

After arriving at the stadium in a BMW motorcade in the company of the elite athletes Bailey, who has visited India before said, “I had the opportunity to compete in Pune in a couple events in the 90s and it was a fantastic feeling to see hundreds of people who had come to support and cheer for me. India is an incredible country and the people here are very warm and the food is incredible. ” The Jamaican born Bailey gave the example of his small country of birth that has a running culture, “Jamaica is a very tiny country as compared to India. Here there is huge potential. The associations need to identify the talent pool and give them the right direction and nurture them,” said Bailey.

On his own athletic career, Bailey said “the victories at the World Championships and the Olympic gold medal, which I won while setting a world record are closest to my heart. I will always be an Olympic champion and the feeling is exhilarating. But, I think more than the gold medal and the records, what motivates me is, and I think it should to all athletes, is to run a perfect technical race.”

The inevitable question about Usain Bolt was answered very clearly by the champion. “Bolt is someone i meet often, talk to and give advise to.  He is a good kid, he is fast and the best. But he still has the potential to improve, his stance and his start could be better. With a height of 6.6 ft he is the only man on the planet who can break records and clock the lowest time.”