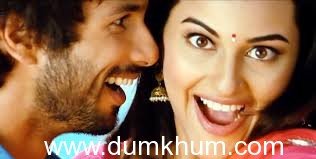 The script of Eros International & NextGen Films’ R…Rajkumar with dialogues penned by Shiraz Ahmed and screenplay by Prabhu Dheva, Sunil Agarwal and Ravi S Sundaram has been chosen for the Academy of Motion Pictures Library.

Starring Shahid Kapoor and Sonakshi Sinha, the Prabhu Dheva directed film released successfully at the box office last year to audience appreciation and has now been approached to be a part of the prestigious library that also houses scripts of iconic films like Devdas, Lagaan and Kal Ho Na Ho to name a few.

The script will be included in the library ,acting as a permanent reference to cinema students – Confirming the news says producer Viki Rajani, “Yes I have been approached by the official Oscar authorities requesting to have the script of R…Rajkumar as an inclusion to their library…It’s a huge honor and I am happy with this recognition for the film”.