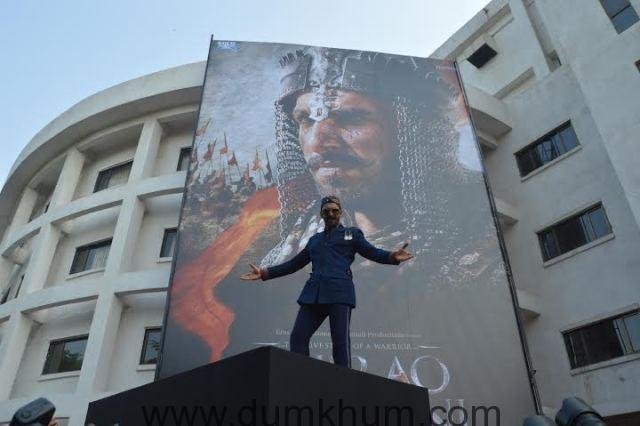 Garners an excellent Rs. 90.80 crore worldwide in its opening weekend, with a gross box office of Rs. 60.80 crores in India and Rs. 30 crore overseas

Starring Ranveer Singh, Deepika Padukone and Priyanka Chopra, Bajirao Mastani has reported phenomenal business overseas too. The film is at number 10 in the Top Ten US box office charts and number 7 on the UK charts. Bajirao Mastani has grossed a fantastic $1.7 million for the weekend in the USA. Eros released Bajirao Mastani across 3750 screens worldwide and expects showcasing to further increase to meet demand in the next week.

With critics and cinegoers hailing the film a “masterpiece” and an “epic saga”, one they highly recommend watching, Bajirao Mastani is a celebration of Indian cinema and it’s no surprise that the critical acclaim has been followed by the film’s remarkable commercial success.

Commenting on the film’s performance, Nandu Ahuja, Sr. VP, India Theatrical, Eros International Media Limited, said, “Sanjay Leela Bhansali has once again delivered a film rich in content and high on entertainment. Bajirao Mastani has truly delivered on its promise of being not just a film, but an experience. Following superb audience and critics reactions, the film has shown an outstanding growth in collections through the weekend. Ticket sales across multiplexes in India have been humungous and extremely encouraging with occupancies ranging between 70 to 80%. This in itself speak volumes of the power of good content and the film’s performance. With at least 2 weeks holidays and no new releases ahead, we expect the film to continue growing”.

Pranab Kapadia, President – Marketing & Distribution, Eros International plc added on the film’s overseas performance, “Bajirao Mastani is a true masterpiece of Indian cinema that we have been very proud to showcase to the global audience. Films like this don’t come along every day and Bajirao Mastani has been one of the most talked about Indian films overseas”.

With the success of Bajirao Mastani, it is indeed Eros’ year at the box office with the company delivering some of the biggest blockbusters this year including critically acclaimed films namely Bajrangi Bhaijaan, Tanu Weds Manu Returns, Badlapur and NH10. Eros has also successfully released a host of regional hits like Srimanthudu, Belaseshe, Mumbai Pune Mumbai 2 etc.