Ekta Kapoor bags the HT Style Award for the Most Stylish Corporate Person 2014. 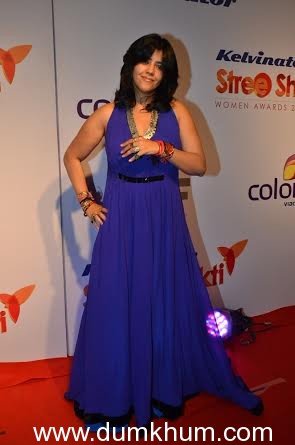 Television Czarina and Film producer Ekta Kapoor was recently announced the Most Stylish Corporate Person at the Hindustan Times Style Awards Delhi 2014.
The award ceremony that aimed at rewarding personalities who not only exude effortless charm and have carved a niche for themselves in their professional sphere ,awarded Ekta Kapoor the “Most Stylish Corporate Person” given her innate sense of style coupled with oodles of substance.

Talking about what makes Ekta stylish says HT , “Cute meets effervescence meets oodles of substance! Soap opera queen and film producer Ekta Kapoor never fails to dazzle with her wit and quirky humour. The lady is also a non-conformist when it comes to trends – she draws her own rules and lives by them in her own true style.”