92.7 BIG FM, India’s No.1 FM Network announced that the network is ‘the Official FM Radio partner in India’ for the ICC World Twenty20 Bangladesh 2014 cricket tournament. Following this announcement, India’s No.1 radio Network held a special trophy preview for fans at Phoenix Mills in Mumbai. Actor Ejaz Khan was present along with RJs from the station who unveiled the trophy amongst much fanfare.

As the Official FM Radio Partner in India for the prominent tournament, which will take place from March 16 to April 6 in Mirpur, Chittagong and Sylhet, 92.7 BIG FM will offer listeners an excellent line-up of unmatched and highly engaging entertainment around the biggest cricket extravaganza. Special coverage and expert opinion during the course of the tournament will include a match review and preview segment exclusively for the listeners of 92.7 BIG FM. Through the 22 days of the game, 92.7 BIG FM invites a celebrity from the film fraternity who will be the ‘Match ka Star’, where he / she talks about the day’s match and love for the sport. In addition, the radio station also presents exclusive, regular and detailed updates on team composition, key players, match trivia and score updates 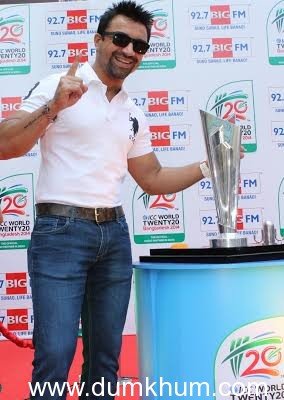 The network will also conduct a thrilling MEGA competition centered on the India-Pakistan match. Listeners will be able to participate in the contest on morning shows where RJs will test a participant’s knowledge on the matches between the two teams. Lucky winners stand to win an opportunity to watch the India-Pakistan match LIVE in Bangladesh. Knowing that cricket is loved across the country and is a religion in India, 92.7 BIG FM will air the contest across 45 stations. Along with promotions on-air and on the digital medium, 92.7 BIG FM will also conduct special Gully cricket tournaments across the country.